Carbon neutral by 2030: your questions answered

With emissions targets dominating news headlines and COP26 underway in Glasgow, MLA has compiled these FAQs around the red meat industry’s ambition to be carbon neutral by 2030 (CN30).

In this recording from a recent MLA update (Impact through sustainability innovations), MLA’s Doug McNicholl takes us through the CN30 roadmap, industry’s progress to date and the actions we can take today to achieve our carbon neutral by 2030 target.

When did the red meat industry set its carbon neutrality target?

Striving for carbon neutrality is nothing new for our industry – we’ve been on the journey towards net zero emissions since 2017. With ongoing investment in this area, the industry is confident it can achieve its ambition by 2030.

Is this target even possible?

CSIRO modelling has demonstrated CN30 is achievable and is compatible with industry’s target of doubling the value of red meat sales by 2030, with much of the science and practice change under investigation or already available for adoption.

What progress has the industry made to date?

The red meat and livestock industry has already more than halved net greenhouse gas emissions since 2005, which is more than any other sector in Australia. Resources | Red Meat Green Facts 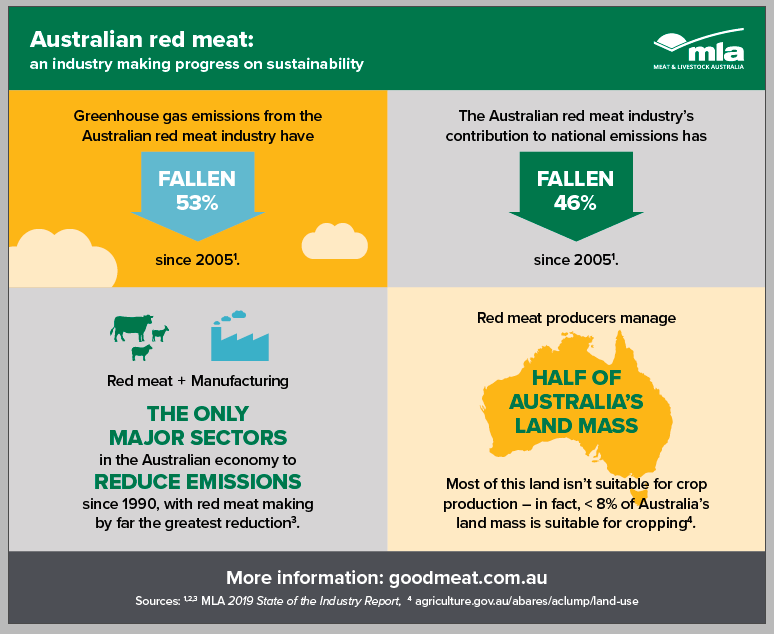 How is CN30 being measured?

CN30 means the Australian red meat and livestock industry will make no net release of greenhouse gas (GHG) emissions into the atmosphere by 2030, as measured by the Australian Government’s National Greenhouse Gas Inventory (NGHGI).

Methane (CH4) is the primary source of GHG emissions from livestock. The gas is a high contributor to global warming but also has the shortest lifespan of all emissions.

The Global Warming Potential (GWP) is the most used and internationally accepted metric to report GHG emissions and is a measure of how much energy a greenhouse gas traps in the atmosphere in a given time period. The GWP of other gases, including methane, is converted to equivalent amounts of carbon dioxide (CO2e) for accounting and reporting purposes.

There are alternative metrics that are being explored for accounting and reporting of short-lived GHGs, such as methane. One is GWP*, which factors in the atmospheric lifespan of GHGs. MLA is currently exploring using both GWP100 (GWP over a 100-year period) and GWP* in future reporting on emissions from the red meat industry. 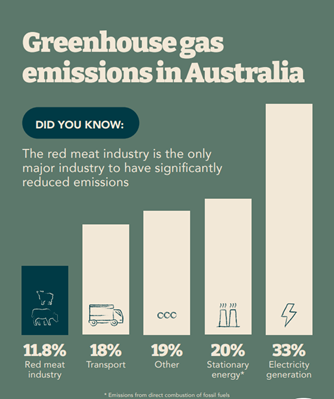 How do emissions from cattle compare to other sectors?

The electricity, energy and transport sectors are significantly larger emitters of GHG than the red meat industry.

The largest emitters are electricity generation (33%), stationary energy (20%) and transport (18%), while the red meat industry makes up approximately 11.8%*.

You’re emitting almost twice as much carbon by driving a car than you are eating beef 3–4 times per week.

But what about all the methane produced by cattle – isn’t that contributing to global warming?

Cattle can actually be part of the climate solution – see video below to find out more.

It’s true that cattle emit methane, a strong greenhouse gas (GHG), but methane is very different to CO2, which is the most abundant greenhouse gas in the atmosphere.

Methane emissions from cattle break down in the atmosphere, whereas carbon dioxide from burning fossil fuels continues to build up over centuries.

Methane emitted by cattle is recycled within 12 years, whereas carbon dioxide emissions from energy and transport sectors burning fossil fuels remain for thousands of years.*

Where can I find out more about MLA’s CN30 target and the red meat industry’s sustainability/environment credentials?

Carbon neutral by 2030: your questions answered