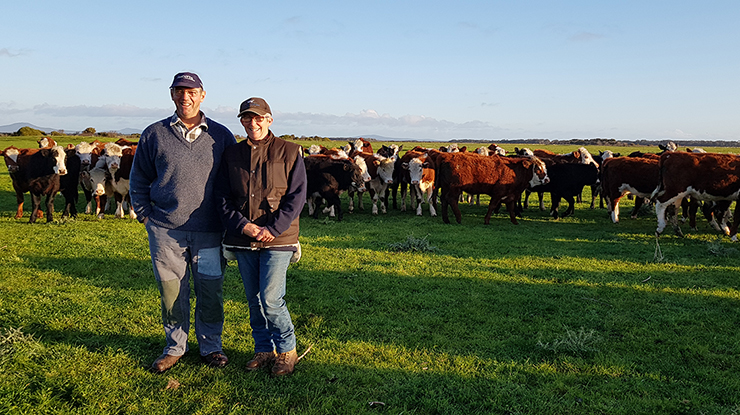 Implementing a production system that revolves around the winter-dominant rainfall of Flinders Island in Bass Strait is among the keys to turning off cattle at their best for Martin and Rosemary Walker.

Martin and Rosemary, and their children, Kate, Grace, Tom and Lucy, ‘Marapana’, have been MSA-registered producers since 2006 when they diversified their Merino operation into beef production, and today run 100% grassfed Hereford and Angus herds comprising a total of 300 breeders.

This year, the Walkers have won the 2019 MSA Excellence in Eating Quality Progress Award for Tasmania.

Their operation is run across two properties comprising 770ha on the picturesque Flinders Island, which is the largest island in the Furneaux Group, north east of Tasmania.

The Walkers utilise a range of tools to ensure their cattle are suitable for markets including MSA.

“The average annual rainfall here is 720mm. Due to the winter-dominant rainfall, we calve from August 1 onwards for eight weeks, and wean from March 1 onwards,” Martin said.

“We aim to turn-off the cattle at 16 months of age, in theory in December.

“All of the cattle go to Tasmania, to the north west coast. We target the feedlot or backgrounding market usually, and in a good season, we grow more out for direct consignment as two-year-olds for processing at Greenham, Smithton.

“We try to have the numbers off by the end of spring and brace ourselves for summer when rainfall is unreliable and there is a definite feed gap.”

The Walkers utilise rotational grazing practices with the cattle run on perennial pastures including ryegrass and clover, as well as phalaris, cocksfoot and fescue.

With one property on mostly sandy loam and the other mostly clay, Martin has been strategically using gibberellic acid to help bulk up their body of feed for the cold and wet winter months, leading in to calving.

“This is the second year we’ve been using it. We apply it to the grass in May and June, lock up those paddocks for 30 days and the plant doubles in size for mid-winter when you need the feed,” Martin said.

Martin is an advocate for the MSA program because of its target specifications and the carcase feedback it provides.

In response to MSA carcase feedback, the Walkers now look at EBVs for fat cover when buying bulls from recognised studs in Tasmania.

“We select bulls based on EBVs prior to a sale, and then visual structural characteristics,” Martin said.

Low-stress stock handling is another important element in their production system.

“The cattle travel 45 minutes by truck to the local port, then have a nine-hour sea voyage to Tasmania, and then three hours on a truck to Greenham’s at Smithton, so it’s important that they’re quiet,” Martin said.

“With rotational grazing, I’m amongst them regularly so they’re used to having me around, and I’ve also done a stock handling course, which has been helpful in learning how to move amongst them.”

All of these elements go into producing cattle that achieve MSA compliance, and Martin said his best tip for other producers is simple: “Have them in as good condition as you can.”