The Australian goatmeat industry has seen substantial growth over the last two decades, with production tripling since the turn of the century. While the prospects for exports are positive, challenges remain in key markets, as outlined in MLA’s latest goatmeat market snapshot.

In 2017, Australian goatmeat production hit 31,000 tonnes carcase weight, rising 4% year-on-year. The majority of slaughter animals are sourced in rangeland areas of western Queensland and NSW, where production can vary significantly due to seasonal factors.

According to Food and Agriculture Organisation data, Australia is not a large producer of goatmeat relative to some countries, but is the biggest player in the global goatmeat trade. Australia exported more than 90% of production in 2017, with exports totalling 28,000 tonnes. While this represents a 6% rise in volume over the year, the value of exports grew by 28% to $257 million, reflecting the increase in export prices. 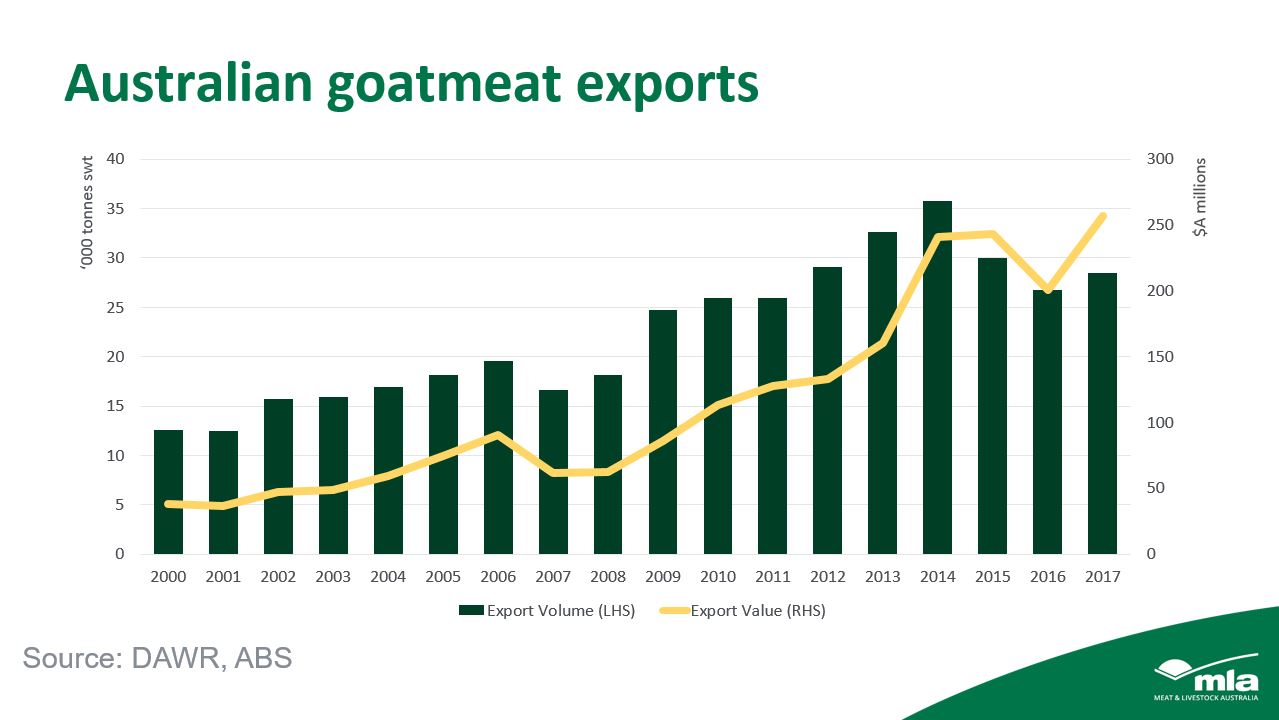 Domestic over-the-hook indicators peaked in July but have since fallen by 30%, due in part to a modest strengthening of the Australian dollar, increasing supplies of other small stock and plant closures.

Despite easing, goat prices in Australia are still historically high, impacting live exports to the price-sensitive Malaysian market. Malaysia is Australia’s primary market for live goats and the value of the trade fell significantly throughout the year, equating to a mere 1% of combined meat and live export value in 2017. Between 2015 and 2017, the number of live goats shipped has fallen 87% to 12,200 head.

Goatmeat is widely consumed globally but remains a niche protein in many markets. Per capita consumption of goatmeat varies greatly between countries, with culture and local production being major factors influencing diet. Population growth and increasing household wealth underpin a positive outlook for global red meat consumption, though unfamiliarity with goatmeat remains a barrier to new consumers.

The US received two thirds of Australian exports in 2017, with Taiwan, Trinidad and Tobago, South Korea and Canada also representing important markets. In a positive sign for future growth prospects, MLA’s Global Consumer Tracker 2017 suggests there are a number of other markets with latent demand for goatmeat.