Cattle and sheep slaughter and production

Latest ABS data for September points to a decline for both slaughter and production across cattle and sheep.

Female slaughter is continuing to account for the larger percentage of the adult kill, averaging just over 51% in September. The 12-month rolling average is just over 49%, the highest level since the end of 2015. Male carcase weights have stayed remarkably stable over the last 12 months despite the drought conditions across much of the country – the national average weight in September was down just 1kg year-on-year to 329kg. This can be mainly attributed to the record number of cattle in feedlots, which are predominantly male cattle. 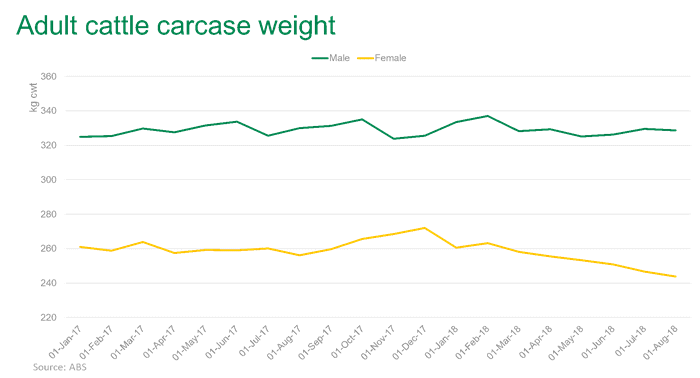 Lamb slaughter has continued to decline since peaking in May, with September recording the second lowest total monthly slaughter in the past five years. Limited availability of slaughter-ready, finished lambs has resulted in the historically high prices seen over the past six months.

Sheep slaughter in September remained elevated – up 21% year-on-year, as processors look to maintain throughput and producers continue to de-stock. The year-to-September sheep slaughter for 2018 is up 30% on 2017 at 6.7 million head.

Nationally, average lamb carcase weights in September fell to their lowest level since 2014, highlighting the shortage of heavy lambs available. At 21.2kg, the average carcase weight has declined 3% year-on-year and is 8% lower than the peak it reached in February.

Unlike lambs, average sheep carcase weight have increased since May – the average in September was up 13% over that time. September was slightly below 2017 levels, a 5% decrease year-on-year to 24kg.