High processor throughput, in particular the elevated percentage of female slaughter, continued in August, further raising concerns for the national herd rebuild and future beef production. Despite female slaughter declining to 55% of the total kill in August, the national herd is locked in a liquidation phase, as on a 12-month rolling basis, the female percentage of adult slaughter remains at 54%.

In-line with easing carcase weights, beef production in August was back 2% on the year prior, reaching almost 208,500 tonnes carcase weight. However, a poor three-month weather outlook should continue to see cattle pulled forward, supporting production for the remainder of the year.

The Eastern Young Cattle Indicator (EYCI) was reported at 485.25¢/kg carcase weight (cwt) on Tuesday and has now traded between 450–540¢/kg cwt since the end of March. In recent weeks, prices have remained relatively stable and are likely to continue to do so, with producers taking a wait-and-see approach.

A fair portion of Southern Australia has experienced a much better season in 2019, with many areas experiencing at least average rainfall over their winter wet season. This has provided greater support for the store market, with restockers active at most sales. This greater competition base has led to the average EYCI eligible animal sold in saleyards south of Dubbo (inclusive) averaging 537¢/kg cwt at the end of last week, a 67¢ premium to the same animal sold north of Dubbo. 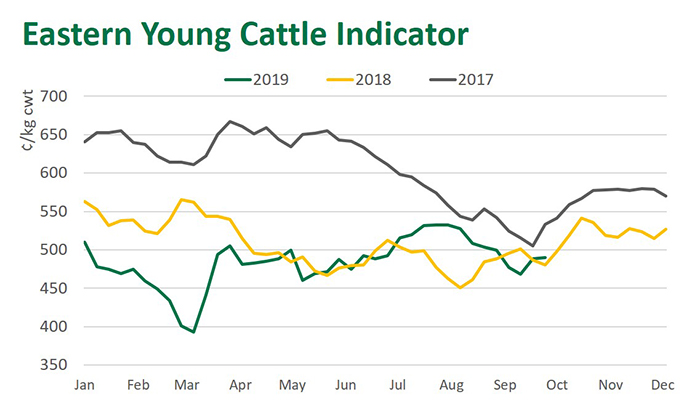 While some southern regions of the east coast will likely be waiting until March before conditions improve significantly, the season so far, may carry them through the summer period with some support from the market. The weather outlook for the start of the Northern wet season offers little in the way of optimism, and until the new year, the market is unlikely to see any sharp corrections.