In the space of a few weeks, predominately influenced by rain across the eastern states, the domestic cattle market trends witnessed in 2019 have quickly altered course.

Throughout 2019, live export cattle traded at an average premium of 28¢ to domestic feeder steers, however this dynamic has now been overturned. As of last week, Queensland saleyard feeder steers averaged 373¢/kg live weight (lwt), while live export steers from Darwin were operating at 360¢/kg lwt.

The recent widespread rainfall across Queensland has tightened the availability of feeder steers, as competition between restocker and feeders intensifies. In the north, supply will likely remain tight and prices elevated until a picture of the northern supply develops, once first-round musters have been completed. Last year, a large number of cattle were transported from the Northern Territory to Queensland, as below-average rainfall depleted pasture availability and demand from domestic feedlots pulled cattle south. If finished cattle prices uphold, more cattle from the north could be destined for domestic feedlots.

Critically, live export feeder steer prices remain elevated and depending on how the aforementioned supply develops, prices are likely to stay above the 300¢/kg, which is often considered the level of affordability for feeder cattle into Indonesia. Albeit, the elimination of the five per cent tariff and access for 575,000 live feeder cattle into Indonesia each year, under the Indonesia-Australia Comprehensive Economic Partnership Agreement (IA-CEPA) will offer some support. 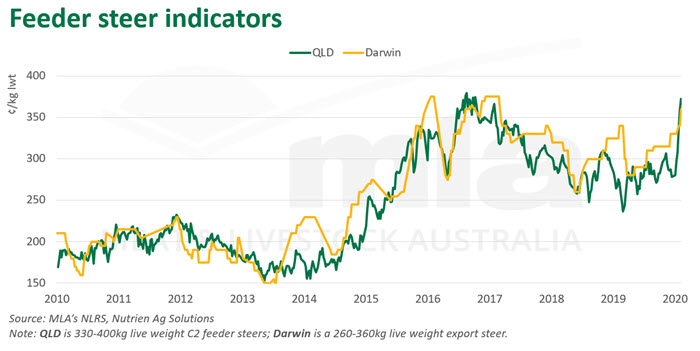 Young cattle prices in WA held a premium over their eastern states counterparts for the entirety of 2019, however recent rainfall has seen this premium swing back in favour of the east for the first time since December 2017. On Tuesday 18 February, the Western Young Cattle Indicator (WYCI) averaged 580.5¢/kg carcase weight (cwt), up 87¢ from year-ago levels, yet 112¢ below the Eastern Young Cattle Indicator (EYCI), which was recorded at 692.75¢/kg cwt, up 234¢/kg year-on-year. 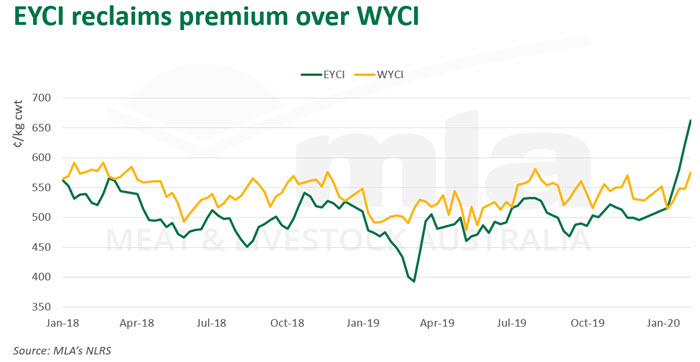 The rain in recent weeks has renewed restocker confidence across the east coast, which has seen competition for young cattle surge in the store market. From where the market opened 2020, young cattle prices in the west have increased 72¢, while the east has seen a remarkable 206¢ increase.