In general, cattle prices have trended down during 2018 as drought conditions increased pressure on the market. However, some states have been more stable than others. In the eastern states, young cattle have struggled to find consistent support in the market as the poor season has unfolded, with the Eastern Young Cattle Indicator (EYCI) on a downward trajectory for the most part of 2018. EYCI category cattle in Queensland have seen the biggest decrease for the year, down 99¢/kg carcase weight (cwt) from the beginning of 2018 to the 16th of September, while NSW has declined 61¢/kg cwt. Prices in Victoria have remained relatively stable easing 10¢/kg cwt.

WA has benefited from a more typical season, especially in the south with prices down only 8¢/kg cwt for the year. Young cattle in the west are now trading at a considerable premium through the yards, with a 52¢/kg cwt premium over NSW and 57¢/kg cwt above Victorian prices.

For the year-to-date (to 16th September):

Similar to young cattle, cow prices have been under pressure through most of 2018. Poor conditions coming in to winter and minimal rain during that time contributed to low restocker competition and consequently, lower prices. However, over the last month, the medium cow indicator has started to see a bit of a resurgence as spring brings some optimism. NSW and Queensland have seen the best of the increases recently – the NSW medium cow indicator rose 79¢ from the start of August to average 441¢ yesterday (Tuesday 18thSeptember) and Queensland increased 81¢ to 460¢/kg cwt. Victoria has also increased, although not to the same extent, up 47¢/kg cwt. 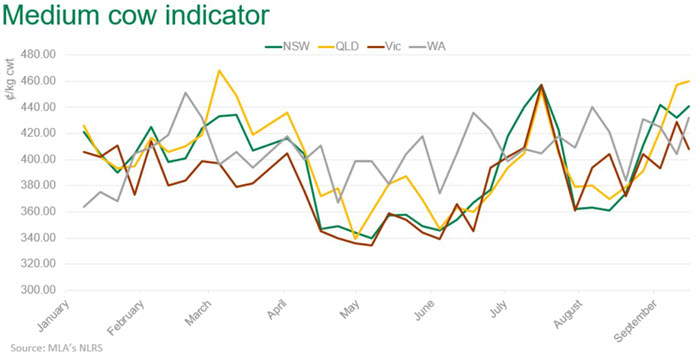 The cow price differential for 2018 is WA, where the indicator remained most stable and recorded a slight upwards trend throughout the year. This is partly due to its low starting point, a 40¢ discount to the eastern states, at 364¢/kg cwt in January. As of yesterday, the medium cow indicator for WA was 432¢, only 9¢ below NSW prices and a 24¢/kg cwt premium over Victoria.

For the year-to-date (to 18th September):