China on top as records reached in 2019

2019 has been an extraordinary year for Australian red meat exports, with domestic and international conditions shifting dramatically. While drought induced turnoff has buoyed meat supply, China’s pull on Australian red meat and a soft A$ has supported international demand. With one month to go, 2019 is set to be the third largest year ever for beef exports (behind 2014 and 2015), the top year for lamb, third for mutton and tenth for goatmeat.

Beef exports for 2019 have been exceptional and, with one month to go in the year, total export volume sits at 1.11 million tonnes shipped weight (swt), 8% above 2018 for the year-to-November period. Growth of grassfed beef exports has been huge, with an additional 73,500 tonnes swt (10%) shipped so far this year. Grainfed beef shipments grew by 5,000 tonnes swt, up 2% on last year.

Beef exports to the US and Indonesia have remained steady however the majority of other markets are down as a result of surging demand from China. China has accounted for all of Australia’s additional export volume in 2019 and then some, expanding by 119,000 tonnes swt. Subsequently, China’s share of total Australian beef exports has increased from 14% in 2018 to 24% this year – now sitting even with traditional powerhouse, Japan. Assuming December volumes replicate November, Japan will relinquish the title of Australia’s top beef export destination to China. 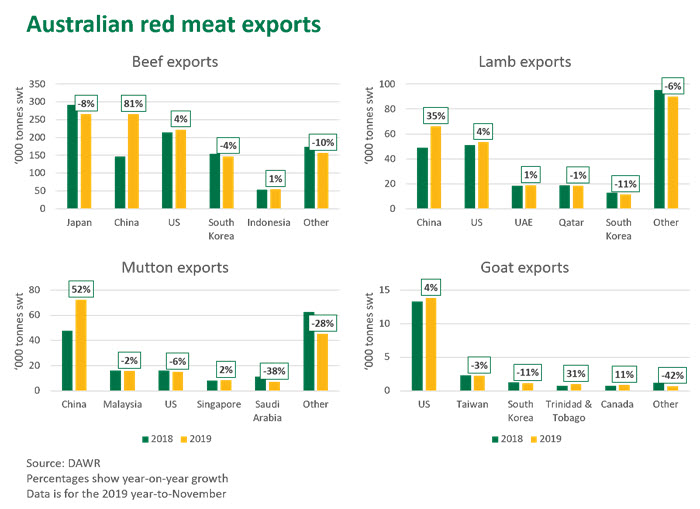 Lamb exports have strengthened again in 2019, with the year set to mark the largest ever for lamb exports and the fourth consecutive year of growth. Total lamb exports for the 2019 year-to-November were 258,000 tonnes swt, up 5% on 2018.

Lamb exports to China have increased 35% year-on-year, while the majority of other markets have seen only minor shifts on last years export volumes, indicating a more even distribution of additional export growth in comparison to beef. South Korea and Iran (due to the collapse in the Iranian currency and removal of subsidies) were the only markets to see a significant drop in their share of exports, while China increased its share by 6% (up to 26% of total lamb exports).

Mutton exports have improved slightly on 2018, reaching 164,000 tonnes swt for the year-to-November, up 1% year-on-year. China has dominated the mutton market, taking 72,000 tonnes swt so far this year, up 52% on 2018 and with a total mutton export market share of 44%. Chinese demand has undoubtedly been placing other markets under pressure, given most top mutton markets, with the exception of Singapore, have recorded negative growth so far this year.

Business as usual for goats

Goat exports for the year-to-November reached 19,800 tonnes swt, up 1% on 2018. The US remains the major market for Australian goat, commanding 70% market share off the back of 4% year-on-year volume growth.

Looking ahead, 2020 will be underpinned by a continued shift in global dynamics, with Australian supply set to tighten, South American beef exports expected to expand and the ongoing impact of African Swine Fever shifting meat trade flows to China. Keep an eye out for MLA’s Beef and Sheep Projections and Global Market Snapshots that will be released in January 2020.