The supply implications of African Swine Fever have been widely discussed as the disease has spread and become endemic across China – the world’s largest producer, consumer and importer of pork.

Initially, panic-liquidation of pigs and the release of frozen pork from cold-store inventories held retail prices in-check in China. However, since June, pork shortages have become acute and retail prices have more than doubled, smashing through any previous market ceiling. Pricing pressure has also spread to other proteins, with retail beef prices in China up 20% since June, and chicken and sheepmeat up 21% and 16%, respectively.

After a 20-week rally, live pig prices in China have cooled in the last fortnight. However, with ASF remaining as critical as ever and the Chinese New Year approaching at the end of January, prices may again come under upward pressure, as the pork supply crunch coincides with peak demand.

The meat trade reaction to the China pork shortage is unprecedented and never before has so much meat been directed into a single, albeit massive, market. However, as discussed earlier this year, this meat trade shift to China has been part of a longer-term trend – ASF has just supercharged this process.

Over the year-to-October, Chinese pork imports have surged 49% year-on-year, while beef (up 55%), poultry (up 52%) and sheepmeat (up 19%) imports have also increased markedly. In total, an additional 1.25 million tonnes of meat and offal has entered the China market over the first ten months of 2019 compared to a year earlier – that is more tonnage than Australia’s global annual beef exports in 2018.

The weight of China is now being reflected in other major markets. US buyers, whom have historically sourced most of their imported frozen trim from Australia and New Zealand, have been forced to lift their bids to remain competitive with offerings out of China. The US imported 90CL beef indicator has rallied 27% (or 207 A¢/kg CIF) in the last four weeks, to a record 972.5 A¢/kg CIF. 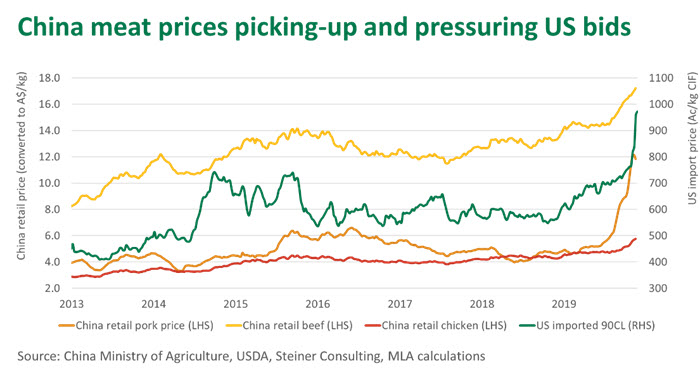 Meanwhile, Brazil, with additional beef plants recently approved to supply the China market, has witnessed slaughter steers prices surge 30% in the last month and the benchmark indicator is now trading at the narrowest discount to the Australian market since 2015. 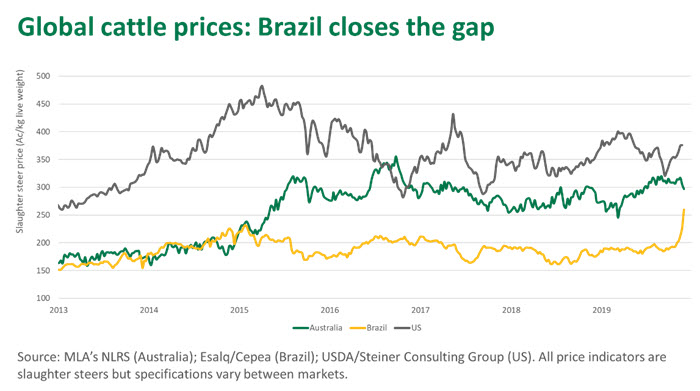 While US pork exports to China have picked-up, heavy tariffs have prevented a significant appreciation in the US hog market and prices are currently trading close to year-ago levels. However, the EU – with a significant tariff advantage and accumulating most of the increased pork trade to China – has recorded a significant lift in pig quotes, with average prices currently trading 32% above year-ago levels and at a 55% premium to their US counterparts (Steiner Consulting).

For now, all eyes are on the US-China mini-trade deal being negotiated and what it may encompass. The US, currently producing record volumes of pork, is a natural partner for China – politics aside – in meeting the growing meat gap left in the wake of ASF.

Unlike other major meat indicators, Australian cattle prices are yet to reflect shifting market dynamics in China over the last month. This is likely being driven by drought-induced ample supplies of cattle coming through to slaughter and most processor kill sheets being booked out through to the end of year shutdown. Weekly cattle slaughter in the eastern states has averaged 156,000 over the last four weeks, 16% above where it tracked over the same period last year. The opening of cattle markets in 2020, especially if the new year brings decent showers over the northern wet season, may prove more responsive to changing conditions in China.