Apart from a sharp downturn at the end of July, the Eastern Young Cattle Indicator (EYCI) has traded between 460–510¢/kg carcase weight (cwt) since mid-April. In recent weeks, prices have remained relatively stable, with much of the industry waiting to see if a crucial break in the season eventuates. On Monday, the EYCI was at 481¢/kg cwt.

As the northern wet season officially started on 1 October, lot feeders, restockers and processors now turn their attention to the seasonal prospects for spring and summer. Although the market appears to be taking a wait-and-see approach at present, things can turn quickly during this pivotal time of the year.

Decent spring rain in key northern production areas could result in a spike in demand for young cattle, in particular females, which saw heightened turn-off during winter. On the other hand, many producers held onto their stock during what was a less-than-ideal winter, and will require rain in the next month to avoid further destocking.

Looking back at what occurred last year, in what was a promising start to an ill-fated summer, well-timed rainfall during October 2017 led to good pasture growth across much of the eastern states. Restocker interest buoyed saleyard prices, and the EYCI rose 74¢/kg, or 15%, to 580¢/kg cwt between the end of September and the end of November.

Therefore, it could be reasonably be assumed that any decent rainfall would result in a similar jump this year. However, a continuation of dry conditions (or just ‘one-off’ rainfall events) would likely see another wave of destocking in the North and further downward pressure on prices.

On Wednesday morning (10 October), the eight-day rain forecast predicted falls of between 10-100ml for areas in south-east Queensland, NSW and Victoria. Longer term, Bureau of Meteorology climate models now suggest a 70% likelihood of El Niño occurring in 2018. An El Niño event is often associated with a later-than-average start to the northern wet season and drier-than-average conditions across the eastern states. 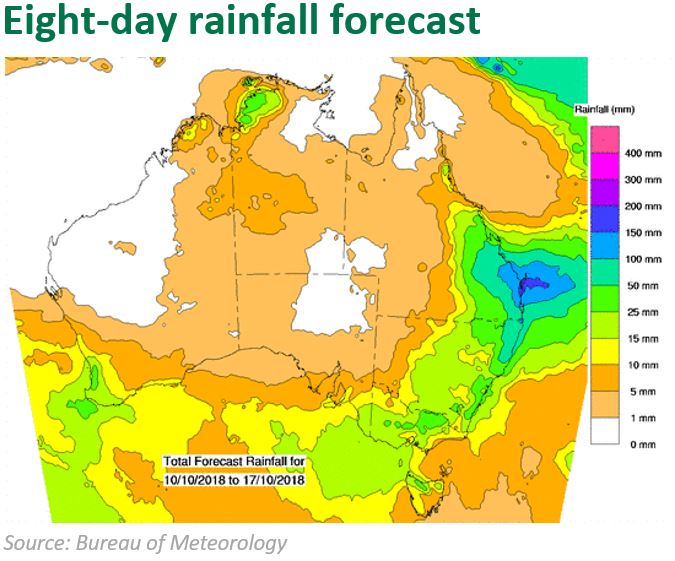