Feeder buyers continue to pay a premium for Eastern Young Cattle Indicator (EYCI) eligible cattle, as they continue to secure top quality offerings, in the absence of strong restocker competition.

Last week, 47% of EYCI eligible cattle were purchased by feedlot buyers, increasing nearly 10% from the same week in 2018.

The increase has been driven by robust demand for grainfed beef in overseas markets, supporting feeder buying activity at a time when the lot feeding sector continues to play an important role in managing climate variability role for the Australian beef industry – evidenced with cattle on feed for the June quarter reaching a record 1.147 million head.

Feeder buyers were averaging 527¢/kg carcase weight (cwt), a premium of 14¢ to processors and 43¢ to restockers, for the EYCI eligible cattle sold last week.

Restocker buying activity remains largely subdued across the east coast, despite the arrival of spring, as feed prospects remain poor for most production regions. Last week, restockers accounted for 34% of sales, slightly back on year-ago levels, with southern markets trading at a significant premium to the northern markets. 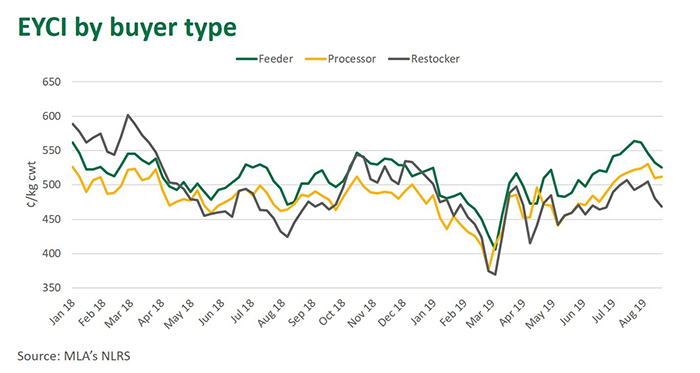 Victorian restockers averaged 525¢/kg cwt, a 53¢ premium to NSW and 82¢ dearer than their Queensland counterparts. Prices for young cattle in Victoria generally trade at a premium to the northern states and off the back of some late winter rain, renewed restocker interest across the state has supported prices. Albeit, restockers only accounted for 10% of the Victorian buyer breakdown.

19% of EYCI eligible cattle were purchased by processors last week, remaining relatively steady with the same period in 2018. The majority of EYCI cattle are sourced from the northern states and the sustained supply through northern saleyards has underpinned processor premiums in the south. For the week ending 30 August, Victorian processors were averaging 549¢/kg cwt, 34¢ higher than NSW processors and 73¢ more than Queensland.