Inconsistent spring rainfall has led to a feed shortage in most cattle-producing regions nationwide. Here Prices & Markets outlines the seasonal outlook, yardings and prices for the cattle market.

Rainfall over the past week was patchy at best, with areas along the NSW coastline and parts of the northern tropics receiving the highest totals.

The inconsistent nature of the rain during spring has led to feed shortages in the majority of cattle production regions nationwide. In some areas, sporadic falls of between 15-30mm were enough to kick-start growth, however, the lack of follow-up rain has been a major hindrance for pasture establishment. 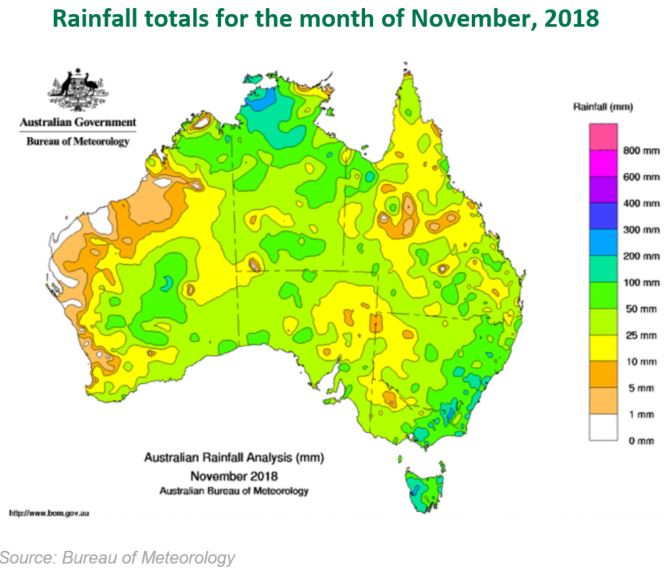 Over the past month, weekly saleyard throughput in Queensland has been running notably higher than 2017 levels.For the week-to-Thursday, numbers increased by 25% on the previous week, to 20,351 head. At the Roma store sale, numbers rose by 1,509 head week-on-week, to 7,696 head. Dalby saw its largest yarding since late July, with 7,582 cattle penned, an increase of 3,615 on the previous week.

In Victoria, numbers were more stable despite rises in Barnawartha and Shepparton. Weekly yardings totalled 12,467 head, down 3% week-on-week.

Turning to prices, saleyard indicators were steady this week despite supply increases in the northern states. As has been the story during spring, markets are most likely waiting on direction from the weather.

For the week ending Monday, 3 December, the Eastern Young Cattle Indicator averaged 519¢/kg carcase weight (cwt), down 1% on the previous week and down 11% year-on-year. The store market has been relatively stable in recent weeks, however, prices would likely respond quickly in the event of widespread rain.

Looking to other eastern states saleyard indicators, heavy steers fell 5¢/kg during the week, to average 293¢/kg live weight (lwt). Despite the decline, the indicator remains 8% higher than year-ago levels, with prices supported by the shortage of quality finished cattle. Feeder steers were down 1¢/kg this week, averaging 298¢/kg lwt, while medium cows were up 3¢/kg week-on-week, to average 213¢/kg lwt.