Throughout the past month, the cattle market has remained incredibly stable. From 23 July to 15 August, the Eastern Young Cattle Indicator (EYCI) moved between 528¢/kg and 534¢/kg carcase weight (cwt). This is the most settled the store market has been over such a long period since 2016 and highlights the holding pattern that buyers are in - particularly restockers.

In a sign that there is diminishing confidence in a substantial break in dry conditions on the way, the EYCI has started to ease in the last few days. Tuesdays EYCI was 508.75¢/kg cwt, down 14¢ on the day before and nearly 20¢ from the end of last week.

All saleyards that contribute prices to the EYCI have seen a decrease in prices this week. 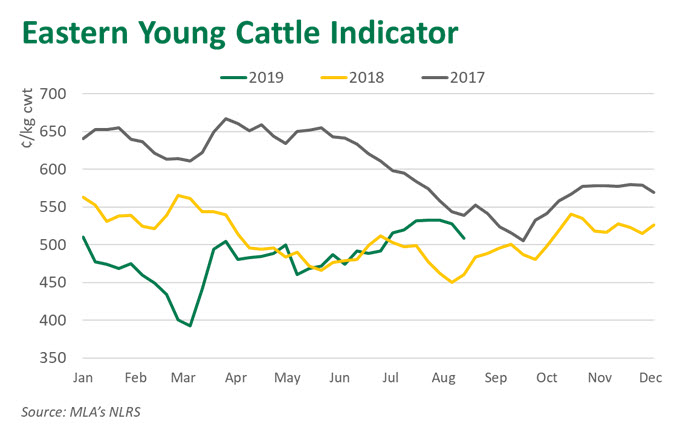 While the young cattle market has come under pressure this week, there are no such signs at the finished end of the market. On Tuesday, the eastern states heavy steer indicator (which records grown steers to processors) was 320¢/kg, up 6.75¢ from the previous week. On a carcase weight basis, the eastern states heavy steer indicator had a 66¢ premium over the EYCI.

The Queensland market, in particular, is driving a premium for finished cattle. At the end of last week, finished steers out of Queensland were trading 55¢ higher compared to young cattle, while Victorian and NSW processors supported finished cattle premiums at 47¢ and 43¢ respectively.

To put this in perspective, for the corresponding week in 2016, young cattle were trading at a premium to finished cattle in Queensland, Victoria and NSW by 129¢, 41¢ and 82¢ respectively. This gives an indication that given a large swing to more favorable conditions, as there was in 2016, the store market is likely to strengthen rapidly. Although, while the drought continues, the difficulty producers face supplying finished articles will provide the finished market a price premium.