Since peaking at 940¢/kg carcase weight (cwt) in June, the eastern states goat over the hook (OTH) indicator has been steadily declining. However, last week the indicator gained a little momentum at 874¢/kg cwt. Although the indicator has eased back from record prices, the current OTH indicator is still sitting 336¢ (62%) above year-ago levels.

For the week ending 1 November, eastern states goat slaughter totalled 18,600 head, back 5% on the previous week, although 49% above year-ago levels. As the national herd has a large composition of rangeland goats, slaughter throughput can often be volatile as harvesting musters occurs opportunistically, making it difficult to supply consistent numbers. With the ongoing dry conditions decreasing the rangeland population and the high slaughter seen in previous months, the decline in slaughter figures since August is not unexpected. 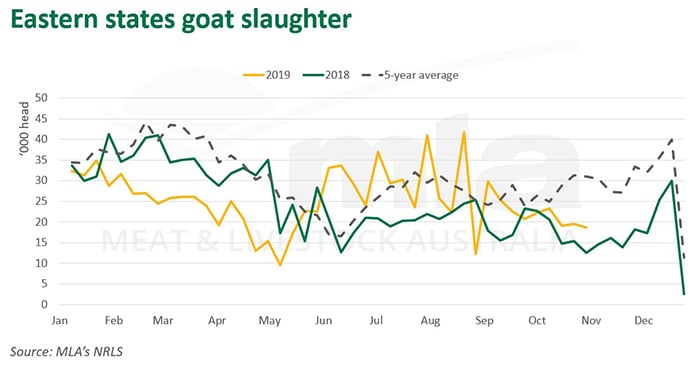 Goatmeat exports for the year-to-October totalled 18,000 tonnes shipped weight (swt), a decrease of 3% on the same period last year. The US continues to be the largest market for goatmeat exports, the destination for 70% of exports for 2019 to date, while Taiwan, South Korea, Trinidad and Tobago and Canada also remain key export markets. Following OTH price movements, export levels for 2019 peaked in July, before easing in the subsequent months, as the primary goat producing regions have been unable to maintain supply while they continue to endure harsh drought conditions.