Female cattle accounted for over 58% of national slaughter for the third straight month in May, further impacting the national herd, as well as average carcase weights. 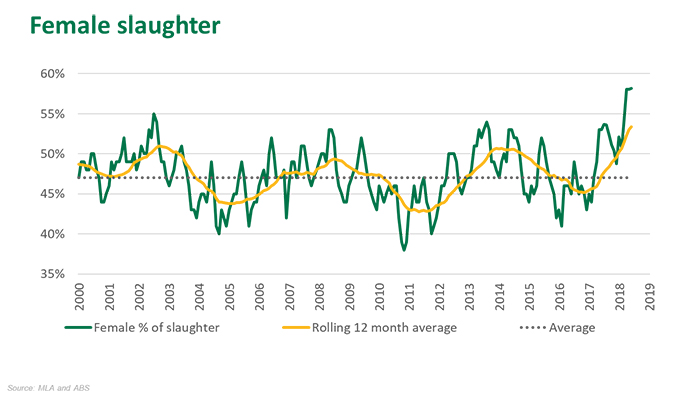 Over the past five years, female carcase weights have averaged 66kg less than male carcase weights. This is predominantly due an emphasis on finishing steers, while selling cows as are. In a drought, that often means poor condition. The increase in female slaughter is putting pressure on the average adult carcase weights and therefore total production.

Despite the high levels of supply, cow prices through saleyards have been impacted to the level one might expect. The national medium cow indicator has averaged 184.5¢/kg in 2019, and while this is 5% down on average 2018 prices, it is still 9% above the average price from the last 10 years.

This week the national medium cow indicator rose 13¢ to 223¢/kg on Tuesday, 17¢ above the same time last year. Young cattle prices have similarly strengthened this week, as the Eastern Young Cattle Indicator rose to 518.25¢/kg cwt on Tuesday, opportunistic buying in the lead up to spring will be providing support to the market.