As the second week of autumn draws to a close, the days still haven’t cooled – nor has sheep slaughter, which raises the question: where will the lambs come from this year?

For the week ending 8 March, sheep slaughter across the eastern states totalled 148,000 head, down 13% on the previous week but up 20% year-on-year.

Since the start of August 2018, eastern states sheep slaughter averaged 154,000 head/week, which is 31% above the 2014–2018 average of 118,000 head/week. This level of sustained elevated slaughter has a growing impact on the national flock size and available lamb supply in the coming years. 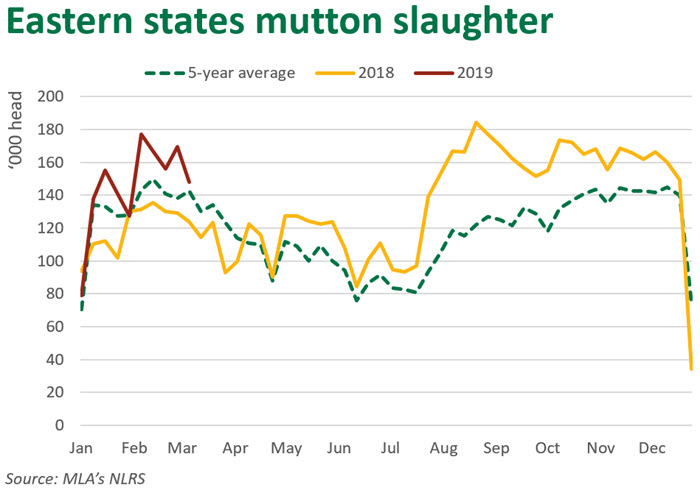 In 2018, annual sheep slaughter totalled 9.5 million head, driven by deteriorating seasonal conditions, particularly in the second half of the year. According to MLA’s Sheep industry projections released in January 2019, the national flock is projected to fall to 65.2 million head by June 2019. These projections assumed below-average rainfall during summer 2018–19, however, it is fair to say the severity of the prevailing conditions have taken almost everyone by surprise. For this reason, national flock forecasts will most likely be revised downward when projections are revisited next month.

Putting recent high sheep slaughter in an historical context demonstrates the resilience of Australian producers and their ability to bounce back after drought. Practices such ewe scanning, nutrition management and genetic improvements put the national flock in a strong position to recover relatively quickly once conditions improve.

Hence, the greatest concern does not centre on the ability of Australia’s producers to re-establish their breeding flocks - it centres on the weather.

Unfortunately, present challenges including rapidly declining feedstock and water shortages cannot be alleviated with one good fall of rain. It will take a sustained period of significantly improved conditions.

While the potential timing of the autumn break is always cause for much speculation, interest this year has peaked due to the harshness of the season. The Bureau of Meteorology’s latest three-month outlook (April – June) shows no strong indication of either wetter or drier conditions for the majority of Australia.