Lamb and mutton prices come off the boil

New season lamb and mutton numbers are continuing to increase, putting pressure on prices. Here Prices & Markets takes a closer look at key market movements during the past month.

The lamb market has come off the boil over the last month, as new season lambs have started entering the market in larger numbers. As of Tuesday, 9 October, all major eastern states indicators were showing declines between 186¢ and 242¢/kg carcase weight (cwt) since the end of August.

Despite the sharp declines, prices have stabilised over the last week on the back of rain across a good portion of NSW. Heavy lambs have maintained their premium over the lighter categories as supply remains very low, receiving 9¢ more than the trade weights and 64¢/kg cwt over the restocker indicator.

These prices are still well above last year – the Eastern States Trade Lamb Indicator (ESTLI) was up 101¢ year-on-year at 698¢/kg cwt yesterday (9 October), a 17% increase. 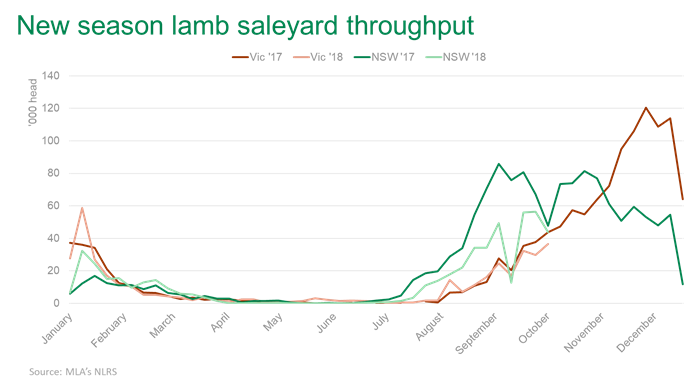 Throughout 2018, total lamb yardings have remained fairly consistent with 2017 levels, down just 3% year-to-date. However, it has been old season lambs propping up these numbers, as producers offload livestock that would have otherwise been retained.

New season lambs in NSW were late to hit the market this year, and numbers are still much lower than 2017. Year-to-date new season lamb supply has been down 24% across the country from 2017 levels, with NSW experiencing the biggest decrease, down 41%. Victoria is tracking fairly closely to 2017 levels, down 1%, although the peak supply season won’t begin for another few weeks.

The supply of heavy lambs has continued to tighten, with only 18% of lambs yarded nationally last week classified as heavy or extra heavy (over 22kg cwt) compared to 31% during the same period last year. Restocker lambs (0–18kg cwt) have seen the bulk of the increase, with 43% of saleyard throughput in this category, up from 32% last year, while trade weight (18–22kg cwt) supply has remained firm.

After hanging on for an extra two weeks after lamb prices started dropping, mutton prices have started to see similar declines. The national mutton indicator was 502¢ on 19 September before losing 140¢/kg cwt by 3 October. This decrease comes on the back of a spike in yardings, with sheep saleyard throughput in August and September up 56%, or 350,930 head, year-on-year. The indicator has since recovered somewhat to 401¢/kg yesterday (9 October).

Eastern states sheep slaughter remains elevated – as has been the case over the past six months. September slaughter was up 37% year-on-year with all states well above 2017 levels. Eastern states year-to-date sheep slaughter is up 31% on 2017, with NSW (up 32%) and Victoria (up 38%) recording the biggest increases. The total annual slaughter is likely to be the highest since 2014 (see projections).