Lamb over-the-hook (OTH) indicators have seen notable increases across the eastern states this week. However, saleyard prices have increased to a greater extent and the rise represents a significantly earlier increase than would ordinarily be expected. Mutton OTH indicators have also moved into record territory.

The national trade lamb indicator this week averaged 808 c/kg cwt, a 64c/kg premium to the national medium trade lamb OTH indicator which finished at 744c/kg cwt – it’s not uncommon for OTH quotes to lag prices seen in the saleyards. OTH heavy lambs also followed an upwards trend, in response to elevated saleyard prices since the start of the year, with processors competing strongly for heavier lambs. The restocker lamb indicator has been the standout, surging to new highs this week finishing at 924c/kg in response to improving feed prospects.

In 2018 and 2019 prices started to lift at the start of autumn and through winter, when lamb supply tightened. However, this year prices have tracked upwards since early January following widespread rainfall across eastern Australia. Processors and restockers are increasingly competing for limited availability of lambs and as the supply contracts in the next few months, prices will likely find continued support.

For the week ending 7 February, the over-the-hook trade lamb indicators averaged the following: 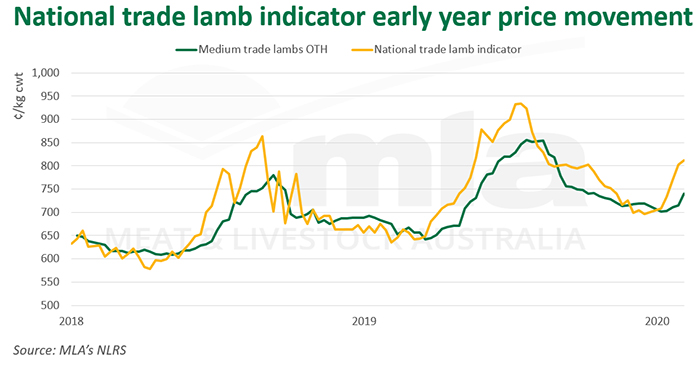 Sheep and lamb supplies have started to diminish, as producer intentions to rebuild are lifting. Combined with strong global demand, mutton and lamb prices could enter unchartered territory in 2020.