Lamb slaughter eased slightly this week off the back of a short week in Victoria, ending a run of consistent weekly increases dating back to 1 August, when eastern states processor throughput bottomed out at 248,000 head for the week. Despite lamb slaughter for the week ending the 27 September easing by 27,000 head on the previous week, supply was still well above the same time last year, up 8% to 301,000 head. 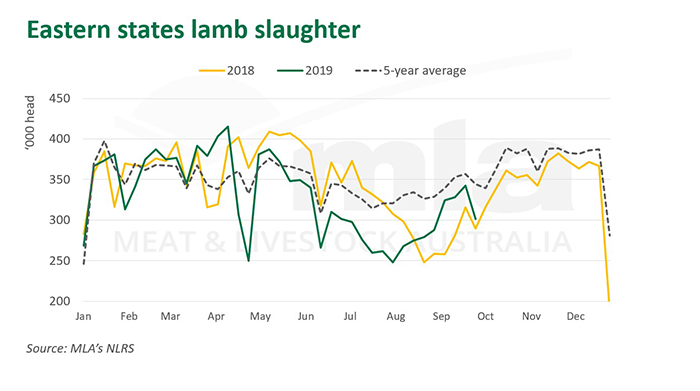 This increased level of slaughter is somewhat unexpected, in particular when the market is viewed through a wide lens. The majority of key sheep production regions are experiencing severe dry conditions similar to last year, which has impacted breeding ewe numbers as well as lambing rates. However, the higher slaughter numbers have predominantly been through Victorian processors, as well as largely improved supply in southern NSW from producers in the Riverina and Murray regions.

Victoria accounted for 52% of weekly lamb slaughter last week with an increase of 15% from their contribution at the start of August. SA increased threefold from August to 47,000 head slaughtered for the week, now accounting for 16% of the eastern states total. This highlights the swing of the new season supply from NSW to Victoria which, due to the better season for a portion of the state, will shoulder much of the supply burden this year and into 2020.

Despite the increase in supply, prices haven’t declined. All major indicators have increased week-on-week, with the Eastern States Trade Lamb Indicator (ESTLI) strengthening to 804¢/kg cwt. Trade lamb prices appear to have found a floor at 800¢, with prices only fluctuating 20¢ since the beginning of August.