China purchased an unprecedented volume of meat in April, with total pork, poultry, beef, sheepmeat and offal (mostly porcine) imports increasing 34% year-on-year to a record 467,000 tonnes swt. Part of this import expansion has been underpinned by the spread of African Swine Fever (ASF) across China. As the China pork shortage becomes more acute in the second half of 2019, expect global meat movements to pivot further to China.

As the extent and reach of ASF across China has become clearer, estimates of the pork shortage have been gradually revised higher, with most commentary placing the contraction between 20-40% (or 10-20 million tonnes cwe) in 2019. While investment may be directed into alternative protein production, the supply response will take time. Even at the conservative end of the shortage forecast, there simply is not enough traded meat around the world, let alone out of Australia, to cover any immediate deficits in China. According to USDA estimates, 2018 total world trade in beef was 10.6 million tonnes cwe (carcase weight equivalent), poultry was 11.2 million tonnes cwe and pork was 8.4 million tonnes cwe. 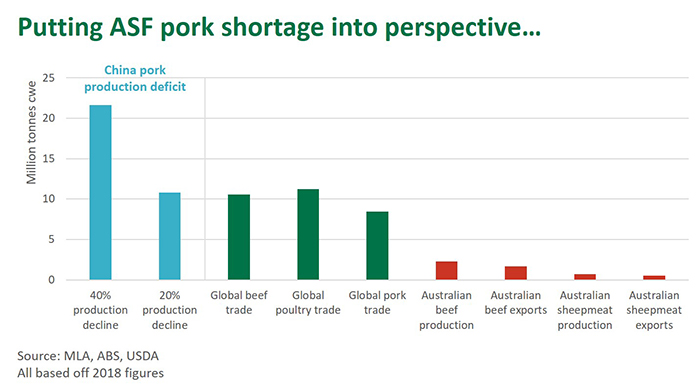 It’s important to note that the import expansion of beef and sheepmeat has been underway for the last two years – well before the onset of ASF, as the growing number of wealthier Chinese consumer’s started to demand higher quality meat. For beef, import growth has also increased due to Brazil gaining access in 2015 and Argentina reforming export controls in 2016. In reality, imported beef and sheepmeat, particularly higher-priced product from Australia, remains out of reach for the average Chinese consumer. In April, beef and sheepmeat imports increased 75% and 43% year-on-year, respectively, to 129,000 tonnes swt and 43,000 tonnes swt.

To date, evidence of an ASF-led boom in meat imports has been limited, as China has covered shortfalls by drawing frozen product from cold stores. However, April pork and poultry imports – which are a fraction of the cost of imported red meat – highlight that ASF is now materialising into increased trade. Poultry imports, primarily from Brazil, increased 65% year-on-year in April, to 68,000 tonnes swt. Meanwhile, the EU and Canada underpinned a 24% year-on-year increase in April pork imports, at 137,000 tonnes swt. 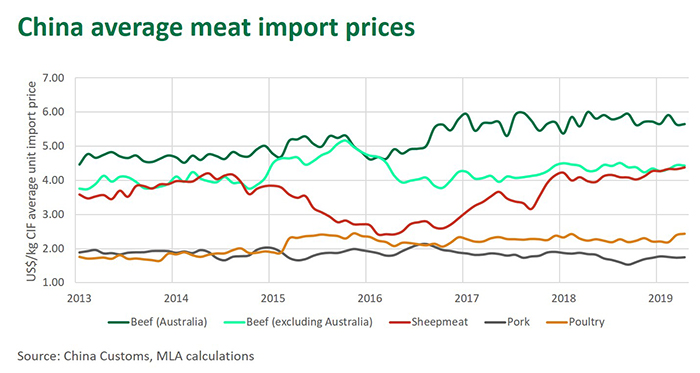 Some of the growth in direct imports can be attributed to a slowdown of product moving through Hong Kong however total meat flowing into the entire Greater China market was still up 17% year-on-year in April. As pork supplies in China cold stores are drawn down and a depleted pig herd is unable to meet domestic requirements, pressure for pork and poultry imports will intensify throughout the remainder of 2019. A key supplier of imported pork is the US – the world’s third largest producer after China and EU and a global export heavyweight. However, trade tensions remain unresolved, leading to speculation and volatility as the market weighs up burdensomely high levels of US pork with the possibility of tariff relief. USDA weekly cuts export sales reports indicate some big pork orders from China have been placed in the last couple of months but few have transpired into delivery, with traders holding back hopeful of a trade war resolution.