This is a remarkable run of strength and consistency for an indicator which is notoriously climate-driven, as demand factors, supported by a softer Australian dollar continues to uphold current price levels. 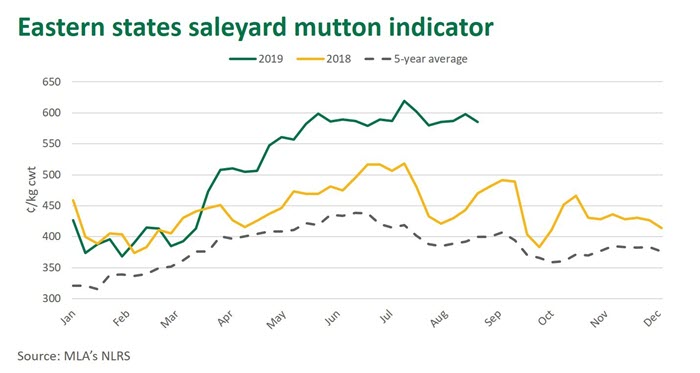 Sheep slaughter continues to track well below year-ago levels, reported at 103,000 head for the week ending 30 August, back 42% on the same week last year. However, the market has started to see a greater volume of ewes start to be sold post-weaning and this is reflected in sheep yardings, which have been steadily increasing since June, reported at 78,700 head last week, 5% below year-ago levels.

Since the beginning of 2019, the eastern states mutton indicator has averaged 512¢/kg cwt, considerably higher than the average across 2016 and 2017 of 404¢/kg cwt, years that were considered very good seasons for the majority of the east coast sheep production areas. More relatable to current weather patterns, the eastern states mutton indicator across 2014 and 2015 averaged 336¢/kg cwt, a 241¢ discount to the current indicator and 176¢ below the average of 2019.

With the market being driven almost entirely by the strength of export markets – approximately 95% of mutton produced in 2018 was exported – robust demand from overseas markets has had a major influence on sustained price levels. Promisingly for producers, demand from overseas markets doesn’t look set to waiver too any great extent in the short term.

Once conditions improve, strong prices for both sheep and lambs are likely to see many producers begin to rebuild their flocks after a long period of destocking. In this event, the subsequent tightening supply of sheep to processors, will likely provide additional support to historically high mutton prices.