Despite high saleyard throughput and climbing slaughter figures, the mutton market in Australia has gone from strength to strength. Here’s the latest on yardings, slaughter and prices across the nation.

For much of 2018, the number of sheep offered at saleyards has been relatively high as producers destock due to the drought. For the year-to-date, national saleyard throughput is 27% higher than the same period in 2017, at 4.4 million head. Yardings in Victoria (up 53%) and NSW (up 33%) have been particularly elevated in 2018, while throughput in WA has been down 16% for the year-to-date. 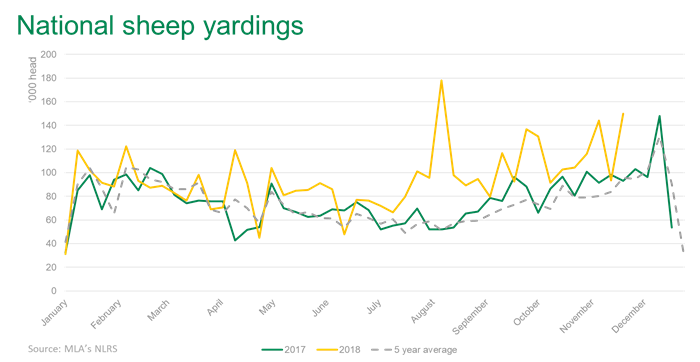 As the poor season has made it increasingly difficult to produce slaughter-ready lambs, processors have been maintaining output by processing sheep. The second half of 2018 in particular has seen a large increase in sheep slaughter – from the beginning of July to 23 November, eastern states slaughter was up 41% year-on-year. The number of sheep processed for the year-to-date is 1.5 million head higher than 2017 levels, at 6.2 million head. 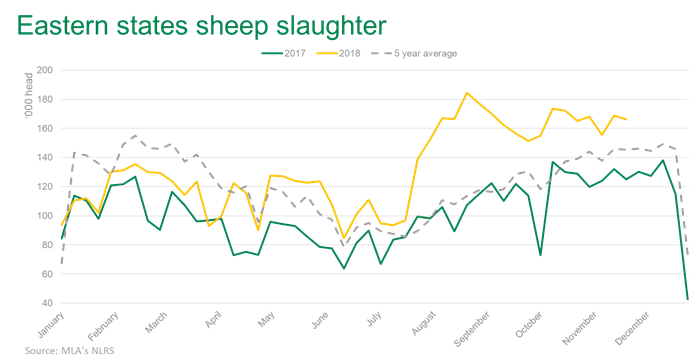 The mutton market has stabilised throughout November following large fluctuations during the first two months of spring. Despite the national mutton indicator being 30¢ below year ago levels, it’s still 90¢/kg cwt above the five-year average.

NSW has been the best performing of the major sheep-producing states – the NSW mutton indicator was at 441¢/kg cwt last week, a 20¢ premium over Victoria and 35¢/kg above WA.

The strength of the mutton market has been impressive, especially considering the high saleyard throughput and slaughter figures. As 95% of mutton produced in Australia is exported, it’s the low Australian dollar and strength of the international markets (in particular the increasing demand from China) that is helping maintain mutton prices at this level.