With summer just days away, producers across the eastern states have been forced to reassess their position, with spring rainfall being a disappointment this year.

For many, the most pressing decision relates to their breeding herds, as costly feeding programs will likely be required to carry stock through to autumn.

Over the past week, isolated falls of between 25–50mm did little to alleviate widespread drought conditions across the eastern states. Markets have entered a period of stability, with the Eastern Young Cattle Indicator at 526¢/kg cwt (carcase weight) on Monday, up 2¢ on the previous week, and 33¢ above the five-year November average.

For those producers who managed to carry breeding stock through one of the driest 12-month periods on record, the lack of drought-breaking rain during spring was a frustration. Months of sustained feeding programs take a toll financially, physically and mentally – with the hope of a seasonal break and price recovery the perceived light at the end of the tunnel.

When the break does come, there’s no doubt breeding stock will be in short supply, given the high female turn-off during winter. As such, the decision not to sell was based on sound logic, as many envisaged a price-spike in the event of rain. However, a failed spring coupled with a 70% chance of El Niño during summer could derail the best-laid plans.

Ideally, those who have made the decision to sell cows would like to do so sooner rather than later, with Christmas plant closures and a potential supply increase factors to consider.

On Monday, the eastern states medium cow indicator averaged 210¢/kg lwt (live weight), up 1¢ on the previous week. At this level, the indicator sits 9% above the five-year November average of 192¢/kg lwt. Despite the heightened supply, prices are still benefitting from a low Australian dollar and strong Asian demand for manufacturing beef. 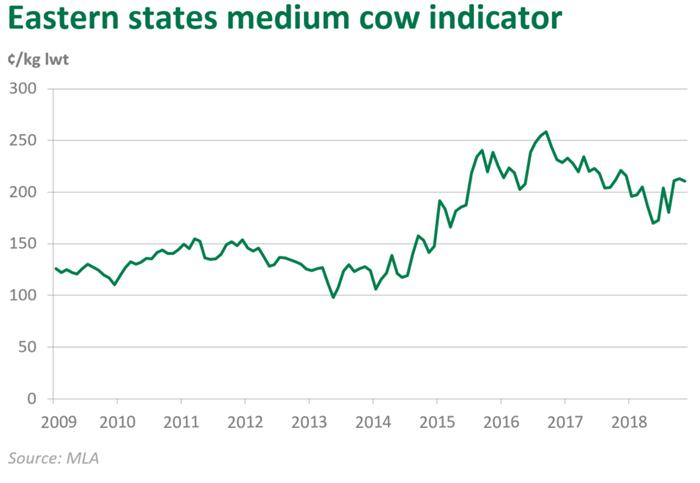 Cow prices in the southern states are currently sitting below those in Queensland. The Queensland medium cow indicator averaged 233¢/kg lwt on Monday, compared with 207¢ in NSW and 198¢ in Victoria. Market reports suggest cow turn-off has been unusually high in Victoria in recent months. Reports also suggest processors in Queensland are keen to keep plants operating at capacity, therefore are willing to pay decent prices for cows in reasonable condition.

In terms of saleyard throughput, eastern states yardings for the week-to-Monday totalled 50,000 head, down 13% on the previous week and down 7% on the same period last year.