September mutton exports jumped 30% on 2017 levels, underpinned by a spike in sheep slaughter throughout August. For the week ending 24 August, the weekly NLRS eastern states sheep slaughter was 185,000 head – the largest weekly kill since March 2014 – and the monthly kill was almost double that of a year prior, with the dry being the catalyst for producers offloading poorer conditioned ewes.

Extended drought in major supply regions across NSW, Victoria and SA during winter and spring has delayed the supply of finished lambs hitting the market. A combination of lower marking rates and producers struggling to finish stock to sale-ready weights translated into a sharp decline in lamb exports in September. 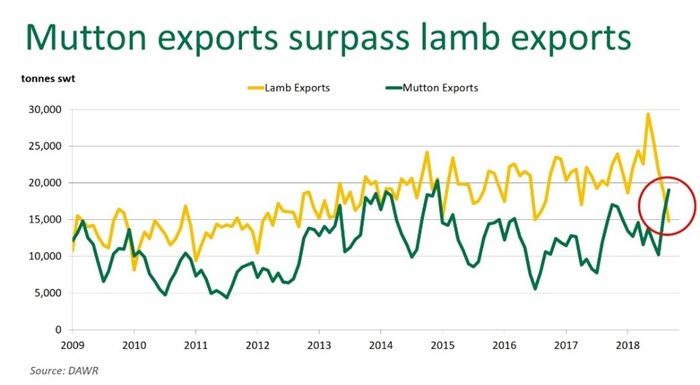 With the exception of China – the recipient of most of the additional mutton hitting the market – limited availability saw exports to the majority of markets decline in September. However, most markets have registered growth or maintained volumes over the year-to-date period.

Australian sheepmeat exports continue to benefit from robust global demand, with surging demand from China and limited competition from New Zealand being the overarching factor elevating prices of late. In addition, further declines for the Australian dollar – now trading just above US70¢ (US10¢ below where it peaked in January) has supported exports.