Beef exports for October finished at 114,000 tonnes swt - the second largest month for the year so far. This was enough to drive total beef exports past the one million tonne swt mark for the year-to-October, a level not seen since 2014 and 2015. Strong international demand for beef combined with high slaughter should sustain export volumes for the rest of the year. 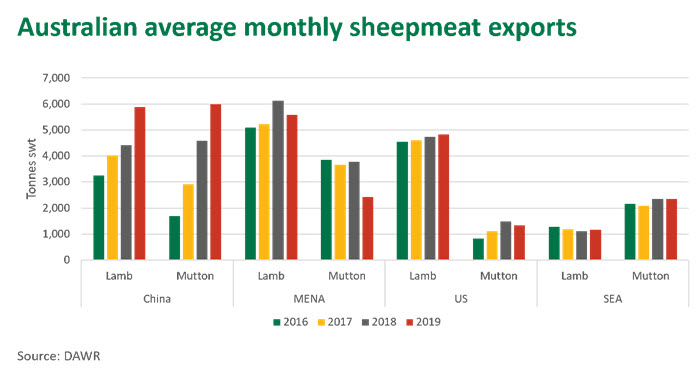 China bought 31,000 tonnes swt of Australian beef last month – their largest month ever. China are now 75% above 2018 volumes on a year-to-October basis. With only two months left in the year, China could possibly pip Japan for the title of top export destination by volume (based on the next two months of exports being similar to October).

Mutton exports to China jumped dramatically in October, up 43% on the previous month to hit 12,000 tonnes swt. China accounted for 60% of all mutton exports last month; a remarkable increase on their 2018 average of 31% as the impact of African Swine Fever continues to be felt.

On a volume basis, Japan has been the top destination for Australian beef for the past three years. However, surging demand from China is no doubt creating more competition, as year-to-October volume to Japan is down 7% on 2018. This decrease is largely due to a drop off of frozen beef (down 11%), while chilled product has only had a minor dip (down 2%).

The United States have been holding their own amongst the rising global demand, as beef exports for the year-to-October are up 5%. Lamb exports to the US have continued to perform strongly, up 7% on last year, as US consumers are increasing their appetite for lamb and US domestic lamb supply tightens.