Australia’s beef exports topped 1.16 million tonnes swt during 2018-19, the third successive year of growth. For sheepmeat, exports reached 463,000 tonnes swt, a result of high slaughter levels driven by scarce and expensive feed. This was the largest volume of sheepmeat Australia has exported in a single financial year. Importantly, global demand for red meat was high at a time of elevated supply, with particularly strong growth from China driven by higher incomes, shifting diets and the spread of African swine fever.

Grainfed beef exports increased to a record 312,000 tonnes swt during 2018-19, representing 27% of all beef exports and a 23% increase on the 10-year average. With ongoing dry conditions nationwide and strong demand for grainfed beef in export markets, cattle on feed are expected to remain elevated.  Heightened cattle turn-off has also driven growth in grassfed beef exports, which were up 7% on last year, reaching 846,000 tonnes swt.

Australian beef export volumes to major beef markets in 2018-19 were:

Mutton exports surged 17% in 2018-19, reaching 188,000 tonnes swt, while lamb exports reached a record 275,000 tonnes swt. The massive sheepmeat export year was not surprising, given high levels of sheep and lamb slaughter recorded across the country, as producers culled stock due to lack of pasture and expensive feed  There was a 60:40 percentage split between the volume of lamb and mutton exported in 2019-20, which is typical of the 10-year average. Volumes to almost all key markets grew in the last year with China (+12% for lamb and +51% for mutton) the standout performer followed by the US (+3% for lamb and +44% for mutton). This rapid growth in China means it now accounts for 27% of all Australian sheepmeat exports, up from 22% last year.

The chilled-frozen split for sheepmeat was typical of the 10-year average, with 26% of all sheepmeat being comprised of chilled product. Of all the chilled sheepmeat, 93% was lamb, highlighting the market preference for higher quality cuts of meat to be chilled rather than frozen. 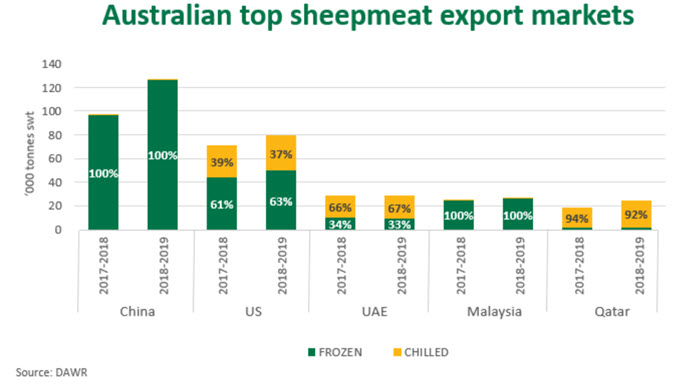 Australian sheepmeat export volumes to major sheepmeat markets in 2018-19 were: