The EYCI dropped to 392.75¢/kg carcase weight on Wednesday, down 172¢/kg cwt year-on-year and its lowest point since December 2014, as restocker buyers continue to fall away.

While the EYCI is generally considered an excellent market indicator, there are noticeable differences in a few key areas. Here Prices & Markets looks at the breakdown of prices by buyer, and which state’s prices are holding up.

Saleyard cattle indicators have been on a slippery slope over the last few weeks with most indicators at, or close to, five-year lows. The Eastern Young Cattle Indicator (EYCI) dropped to 392.75¢/kg carcase weight (cwt) on Tuesday, down 172¢/kg cwt year-on-year and its lowest point since December 2014.

The EYCI has dropped below the 400¢/kg cwt mark and it predominantly is the lack of restocker demand, resulting in an oversupply for processors, that’s driving the fall. At the end of last week, young cattle purchased by restockers and processors were trading at 376¢ and 378¢ respectively, while feedlots have been operating at the better quality end of the market, and as such were on average paying 426¢/kg cwt. 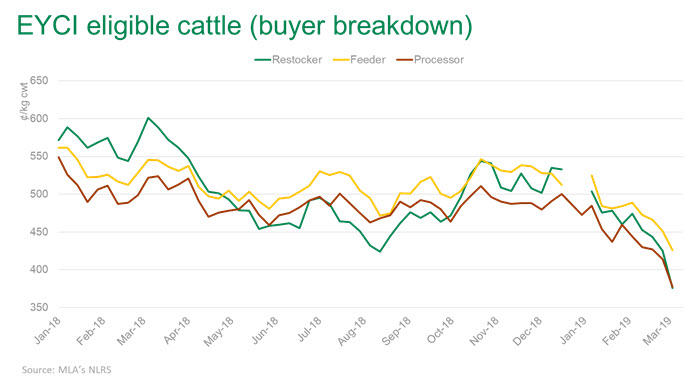 So far through 2019 restocker buyers have fallen away the most. After opening the year averaging 504¢/kg cwt they have decreased by 128¢/kg cwt with processor buyers down, 107¢/kg cwt and feeders down 99¢/kg cwt.

Queensland and Victoria both started 2019 averaging 499¢/kg cwt while NSW was trading at a slight premium for EYCI eligible cattle at 514¢/kg cwt. A severe lack of summer rain has heavily impacted the northern half of the country as many producers eye off another winter with no feed. This, combined with a lack of surface water in many parts, has contributed to a rapid turnoff of young cattle in recent weeks. 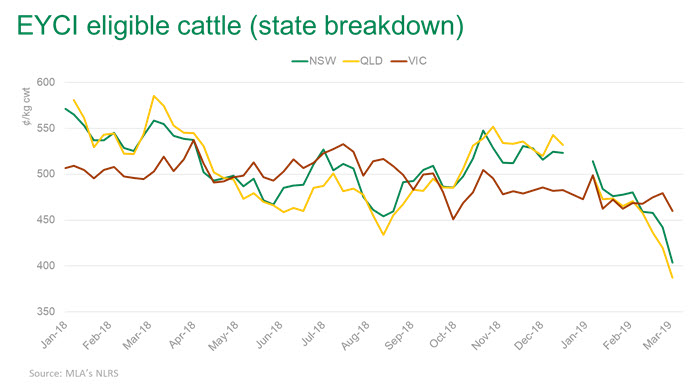