The national trade lamb indicator (NTLI) opened 2020 close to where it finished in 2019, reported at 705¢/kg carcase weight (cwt) on Wednesday 8 January, 7% above year-ago levels.

So far in 2020, lamb prices have been buoyed by renewed optimism from producers following widespread rainfall across the eastern states. For the two weeks over the Christmas break, lamb slaughter eased over 30% in the eastern states, with processors now fully active and looking to secure. However, competition is expected to hold in coming weeks, with national lamb yardings for the first two weeks of January easing 5% on year-ago levels. 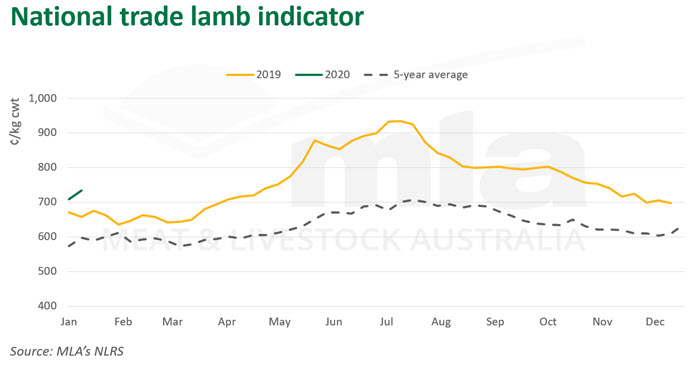 Historically, the NTLI remains stable in the early weeks of the new year, however the forecast for limited supply availability, combined with strong international demand has resulted in the indicator trading at elevated levels to those seen historically throughout the January period. Since the turn of the year, the NTLI has climbed 4% or 34¢ to be reported at 739¢/kg cwt on Tuesday 21 January.

The flow on effects from the drought saw below average marking rates across the country in 2019, which is expected to result in a similar, if not more pronounced decline in supply this year. Should we see a return to ‘average’ seasonal conditions within the next 12 months, demand for younger lambs will dominate the store market as producers look to rebuild their flocks.

With fewer lambs on the ground, the prospect of more ewe lambs being retained for breeding and strong demand fundamentals, lamb and mutton prices can be expected to remain at historically high levels (potentially records), in 2020.