The dynamics of the sheep export industry are evolving, with the trade halted again through June – September via a temporary cessation.

The Middle East remains Australia’s most valuable market for live sheep exports. Challenging climate conditions and desertification limit the capability of domestic agricultural production across the Middle East, while expanding populations and urbanisation has underpinned a reliance on red meat and livestock imports to fulfil consumption needs.

The nature of sheep production in Australia has evolved over the past three decades, with a shift towards dual-purpose sheep breeds and a greater use of land for broadacre cropping. With the subsequent decline and changing make-up of the Australian flock, sheep exports to the Middle East more than halved over the past decade, from 4.21 million head (2008) to 1.89 million head (2017), before declining further in 2018 and 2019 due to the northern hemisphere summer trade cessation.

Total exports for 2018 were 1.1 million head, while 2019 shipments are sitting at 810,000 head for the year-to-October. WA continues to be a powerhouse in supplying this trade, contributing 80% towards all Australian sheep exported.

Whilst the live trade has slowed, chilled carcase exports have grown substantially over the last decade, underpinned by evolving markets and operational capabilities. Improvements include cold chain advances, an expanding air freight industry, rising income levels and the development of modern retail hyper and supermarkets across the Middle East. Substantial regional demand for locally slaughtered animals, especially during religious festivals, will continue to support the live industry regardless of country of origin.

Access to live export markets plays an important role in supporting competition between processers and exporters in WA, providing sheep producers options for turnoff, especially during periods of seasonally high supply. This allows a high number of sheep to be sold and exported in a timely manner, for instance in the face of drought – the effects of which are compounded in WA as there are fewer options to move stock compared to integrated systems in the east.

Based on year-to–October 2019 figures, total live exports to Middle East are down 45% from the 2013-17 average. Prior to the cessation, sheep exports between June-September averaged 550,000 head across 2013-17. While export numbers in October were subdued due to the rotation of export vessels, November should be a big month, setting up for a strong finish to the year. Live exports are forecast to finish 2019 close to the 1 million head mark.

WA sheep and lamb slaughter this year has largely been aligned with the 2013-17 average, elevated through May, ahead of the Ramadan period, before dropping away through the typical winter supply trough. This normal slaughter during the cessation months activity highlights the limited pathway substitution from live to carcase. This is as expected, given the bulk of air-freight carcase exports are comprised of light lambs while live exports are predominantly, albeit not limited to, mature-weight Merino wethers.

As sheep slaughter through the Australian winter was steady and interstate transfers limited, producers have evidently been holding onto stock which would have traditionally been earmarked for live export. Higher wool prices in the last couple of years would have also incentivised this approach, as producers look to capitalise by re-building Merino flocks. However, WA sheep slaughter picked up in October and November, with kill floors working through elevated numbers of sheep coming off paddocks and incentivised by strong mutton prices. 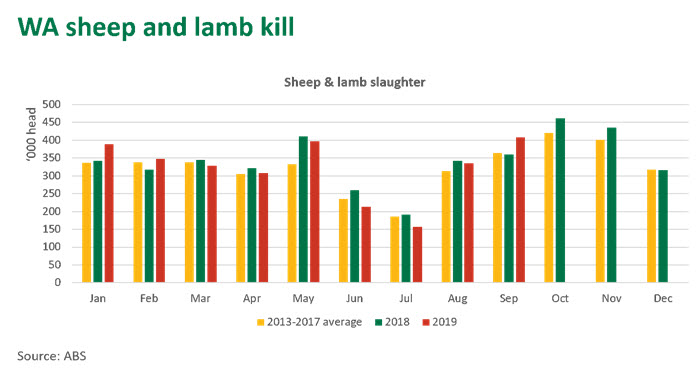 WA lamb and mutton prices reached elevated levels through winter, with tight supply and strong demand out of China supporting the increase. Normally, having a major buyer step back from the market would reduce competition and depress prices. However, the additional demand China has injected into the east and west markets in the last year has made evaluating this impact difficult.

While WA sheep and lamb prices have tracked at a discount to the eastern states for most of the year (these markets are fundamentally different, with supply and demand dynamics often placing the east at a premium) they have largely out-performed 2018 and the five-year average. 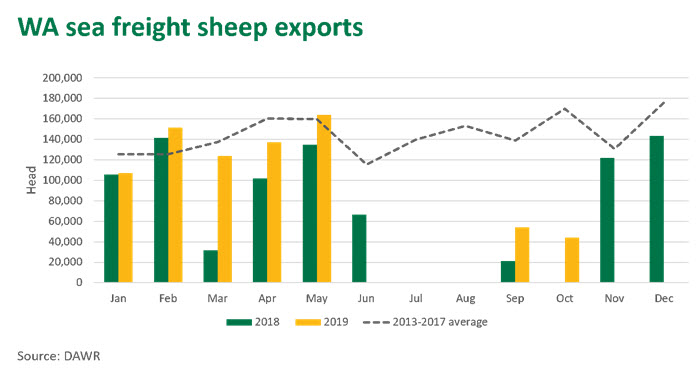 While there wasn’t a complete shift in trade, chilled carcase exports from WA to the Middle East picked up a touch through the cessation period, albeit this was not as pronounced as last year.  WA exported just shy of an additional 1,000 tonnes swt, or 50,000 head equivalent, during the June-September period this year, relative to the 2013-17 average. However, this additional volume of carcase trade would only offset approximately 9% of the sheep that would have typically been exported live over the period. 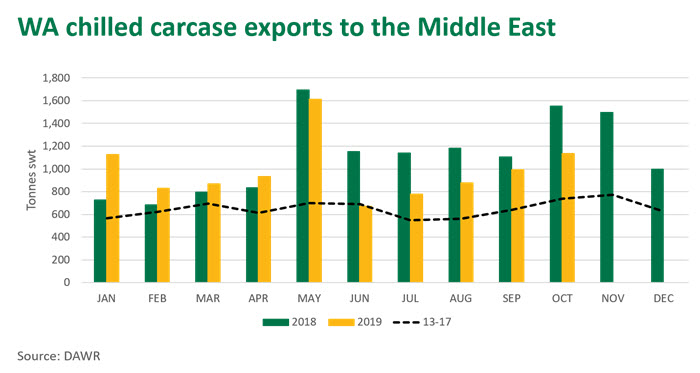 The growth of chilled carcase trade to the Middle East has been enabled by the growth of the air-freight industry. While carcase exports from Perth Airport have increased in recent years, capacity is limited by flight frequency and the supply of suitable stock may restrict the ability to further expand this form of trade.

With global demand for sheepmeat booming and supply relatively tight in Australia and New Zealand, shipments into the Middle East have dipped, with imports from Oceania down 22% year-on-year for the year-to-September.

While China has become a dominant player in the frozen market, Middle East is still actively pursuing higher value chilled sheepmeat. For the 2019 year-to-October, Australian mutton exports to Middle East were down 37%, while lamb exports were relatively steady, back just 2%. 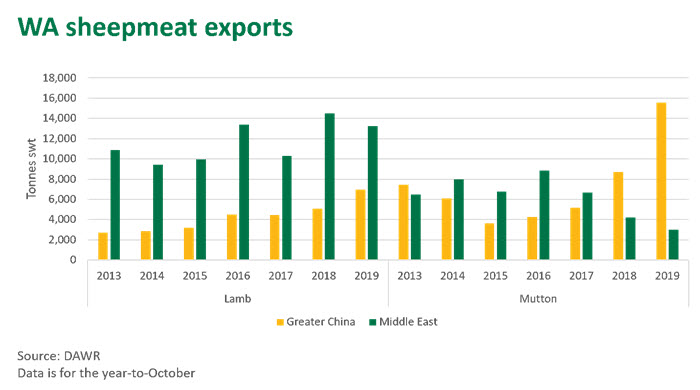 Looking at markets within the Middle East, Australian live exports this year have dropped away for most of the primary destinations, while the carcase trade has continued to grow, with the exception of Jordan and Bahrain. Kuwait, Qatar, Jordan and the UAE have been the only destinations for live export in 2019, and with just two active exporters currently servicing these markets, export volumes can often be dictated by their capacity. 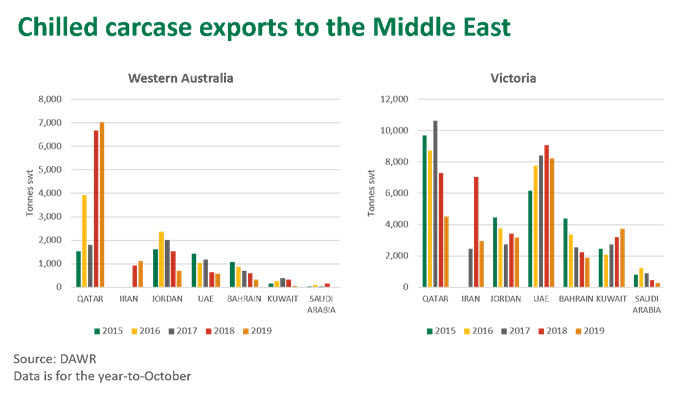 Qatar has emerged as the major market for chilled lamb, accounting for 25% of all lamb exported from WA, up from just 8% in 2017. The WA carcase trade to Qatar has been facilitated by a daily flight between the two. Additionally, Qatar is currently upgrading a range of imported sheep supply chain infrastructure, causing a short-term switch from live to carcase imports until this is commissioned. More broadly, demand in Qatar is expected to continue growing, with huge infrastructure projects under way ahead of the Fifa World Cup in 2022.

Kuwait is now the top market for Australian live sheep however this top position may be temporary and depend on how long Qatar live imports take to becoming fully operation. Carcase exports to Kuwait have picked up in response to a drop in live however this has predominantly been supplied by shipments out of Victoria.

Jordan has reduced imports of Australian sheep and chilled carcases, opting to source sheep from Romania at a lower price point. Less affluent than their neighbouring countries and not as connected to air-freight routes, Jordan has been less able purchase and compete in the carcase market.

The sheepmeat trade to Bahrain has steadily declined, and the live trade completely ceased, after their government removed subsidies on both products in 2015. Bahrain initially moved to importing limited volumes of chilled mutton carcases, at a lower price point to offset the subsidy, but has since moved to cover the deficit through imported chicken.

After sustained demand since 2017, Australian lamb carcase exports to Iran dropped sharply from June 2019 due to US sanctions restricting oil export revenue and the subsequent removal of government exchange rate subsidies. The future of the market will largely hinge on US-Iran relations and the continuation of sanctions.

While some markets utilised the carcase trade to fill a supply gap through the cessation period, there was still a large supply deficit from the lack of live sheep exports. Kuwait and Qatar received shipments from Romania and Sudan, while Oman received from Sudan and Sub-Saharan Africa. Additional imports of other protein types were also evident, with Brazilian sending 260,000 tonnes swt of frozen poultry exports into Egypt, Qatar and the UAE – their highest volume for the year-to-July yet.

The fundamentals of fresh

Across the Middle East, meat ‘freshness’ remains front of mind amongst consumers and it is one of the top considerations in the meat purchase decision-making process. Due to a combination of historical, cultural and infrastructure factors, locally slaughtered animals are still perceived to be the freshest source of meat. In addition, live animals play a key role during religious festive events, such as Eid al-Fitr (end of Ramadan) and Eid al-Adha (Festival of the Sacrifice), occurring in May and August, respectively, in 2020. Ramadan and Eid al-Adha move forward approximately 11 days every year, making heat management for these periods easier as the timing moves out of the northern hemisphere summer months.

These factors will underpin demand for live animals going forward, therefore Australia’s ability to supply will largely hinge on the regulatory environment.  Even if the summer ban isn’t extended to a wider timeframe, one risk is that current trade restrictions will erode the economies of scale of the industry, with a smaller total revenue stream from the shortened trading year.

The live export industry remains an integral component of the WA economy and sheep industry. A recent research report, conducted by Mecardo and commissioned by MLA and Livecorp, highlights the integral nature of sheep exports to the WA rural economy.