Since April, eastern states mutton prices have traded at an all-time high. Normally a key indicator of how the season is tracking, strength like this in the mutton market, particularly during severe drought, is unheard of.

In 2018, it became obvious there was a higher percentage of ewes and wethers not meeting the specifications for the eastern states mutton indicator, either having a fat score of 1, or weighing less than the 18.1-24kg carcase weight (cwt) bracket.  As a result, 29% of sheep yarded were not recorded within the price indicator, while 37% were inside the specifications and 34% were too heavy. 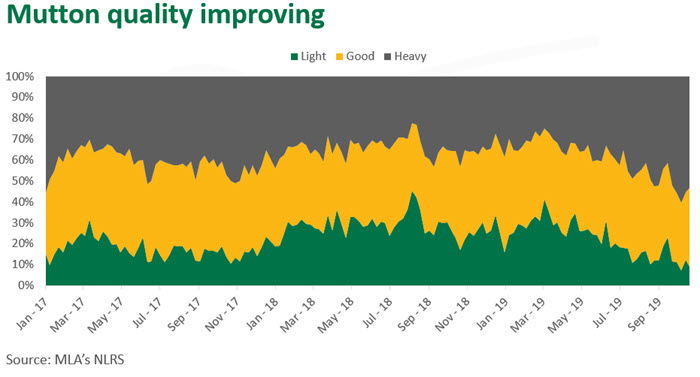 The percentage of light sheep entering saleyards in 2018 was considerably higher than the relatively good season of 2017. In 2017, only 18% of ewes and wethers in saleyards fell below indicator specifications, and those in the indicator or above, each accounted for 41% of supply. Therefore, in 2018 it appeared that, while prices were strong, it was demand for the few available good quality sheep, combined with an oversupply of poor quality offerings, that was driving the indicator higher.

Now in 2019, despite a return to near 2017 levels of good conditioned sheep available at saleyards, buyers are still competing strongly for all mutton, with the eastern states mutton indicator averaging 587¢/kg cwt last week. While those heavier than 24.1kg cwt were trading at a slight premium of 3¢, the ewes and wethers lighter than the indicator were still trading at an extremely strong price of 564¢/kg cwt.

Supply is likely to tighten in 2020 given the shrinking pool of sheep available and high prices encouraging producers to increase their flocks. With demand for mutton holding strong, particularly in the Middle East and China, in part underpinned by the African Swine Fever epidemic, it is unlikely that prices will decrease significantly over the next 12 months.