Total eastern states yardings dropped 21% on year-ago levels to 42,700 head for the week ending 24 July. The decline was largely driven by New South Wales, which fell 39% year-on-year to 13,200 head and Queensland which contracted 13% to 19,100 head. Yardings in Victoria dropped to the lowest level since May at 6,600 head, a 22% decline on year-ago levels.

While a supply lull is anticipated over the remainder of winter, this year has been exacerbated by intense restocker activity and heightened stock retention. However, for July, the impacts of border closures and social restrictions in southern markets have added further pressure to the supply chain. Total July yardings sit 24% below the July five-year average (212,830 head) at 162,900 head.

Eastern states cattle slaughter was reported 25% lower year-on-year at 111,500 head for the week ending 24 July. In Queensland, adult cattle slaughter contracted 32% on the same week last year to 54,700 head, the lowest level since March (excluding public holiday weeks). Much of this decline has been driven by limited availability of slaughter ready cattle, particularly steers for finishing. For the year-to-date, the National Livestock Reporting Service (NLRS) reported Queensland male slaughter at 994,000 head, 13% below the five-year average of 1,126,000 head.

Adult cattle slaughter in New South Wales followed similar trends to its northern counterpart, contracting 9% year-on-year to 31,575 head, albeit the highest level since the start of April as cattle travelled north from Victoria. Disruptions in Victoria saw a 36% decline in slaughter compared to year-ago levels to 16,200 head, back 13% on the week prior. 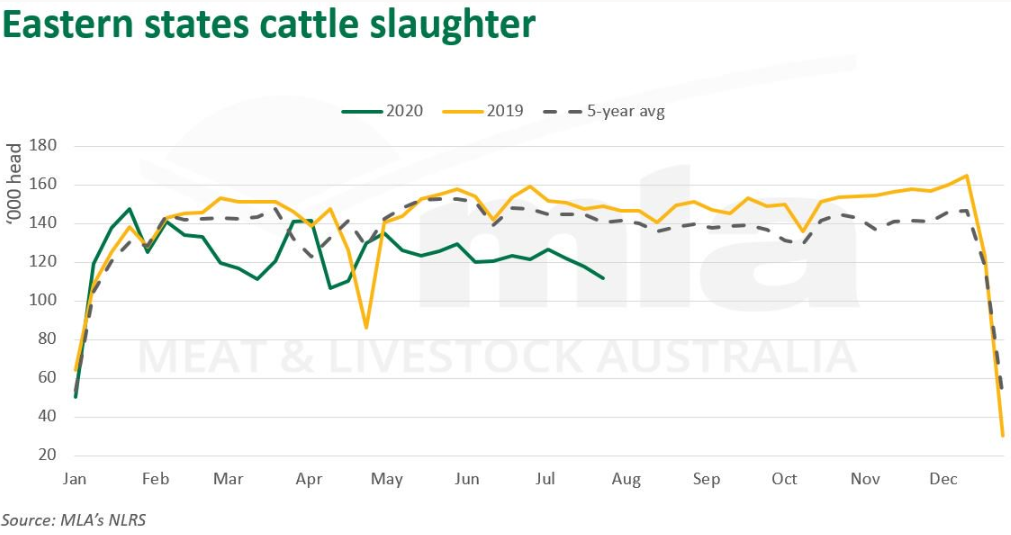 Despite eastern states indicators softening from the highs seen in June, they continue to track at historically high levels. The eastern states heavy steer indicator averaged 362¢/kg live weight (lwt) on Tuesday 28 July, up 15% on year-ago levels but back 6% from the June high (386¢/kg lwt). The Eastern Young Cattle Indicator has followed similar trends, up 42% on the same week last year to average 752¢/kg carcase weight (cwt) but easing 2% from the record 772¢/kg cwt reached in June.