After a 19-year hiatus, Uruguayan beef has returned to Japan, Australia’s largest export market in value and volume terms. However, supply constraints, pull from China and price will limit Uruguay from challenging the dominance of Australia and the US in the market.

After Japan and Uruguay signed an agreement in December to resume two-way beef trade, 16 Uruguayan plants were approved to export chilled and frozen beef to Japan (out of 36 in operation in 2018) with first shipments being reported in February.

Prior to the ban, Japan imports of Uruguayan beef peaked at 6,900 tonnes swt in 2000, virtually all of which was frozen.

Uruguay has some of the best sanitary standards, traceability and product integrity in South America. In addition, a predominantly Bos taurus herd base and investment in genetics underpins their ability to supply quality beef.

However, the country remains dominated by grassfed production systems – a major constraint to perusing the premium grainfed market in Japan. According to the USDA, about 15% of Uruguayan cattle slaughter was finished on grain, most of which was destined for export markets such as the EU. Grassfed beef opportunities, however, may lie in frozen manufacturing trim for further processing and foodservice channels, in addition to higher value offal items such as tongue.

Regardless, land and pasture availability remain primary constraints to supply expansion. Production has hovered between 500,000-600,000 tonnes cwt over the past decade, and the USDA are forecasting a contraction in 2019 due to a modest herd expansion and live export demand diverting supply away from slaughter.

While production may have flat lined, exports have expanded over the last five years at the expense of the domestic market. China has been the principal driver behind this export pull as other traditional markets, such as Russia, have contracted. However, pulling product from the domestic market to fuel export growth is not sustainable. As such, new buyers will have to contend with an expanding China market, which accounted for 56% of Uruguayan beef exports in 2018.

A strong currency, in contrast to the other major exporters in South America, and limited supply availability have kept pressure on cattle prices in Uruguay – so far in March, the Uruguay finished steer indicator has averaged a 25% premium to Brazil, a 47% premium to Argentina and has ever surpassed similar indicators in Australia on a currency adjusted basis. 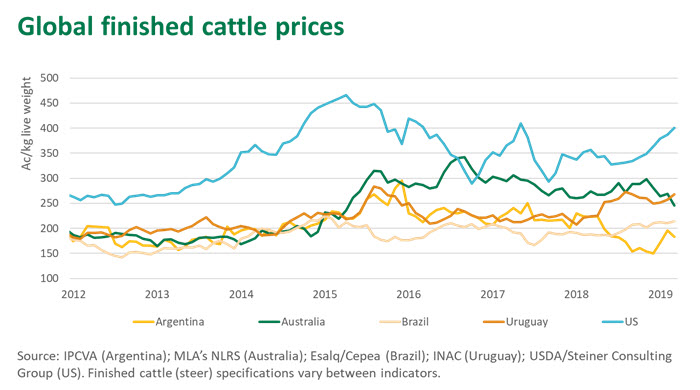 Uruguay also doesn’t have a Free Trade Agreement with Japan and will sit on the same tariff schedule as the US – that is 38.5%, compared to the 26.6% on beef from Trans Pacific Partnership (TPP) members, including Australia, from 1 April. Without a pre-existing customer base and broad consumer loyalty, Uruguay will need to be very price competitive to carve out market share – a challenge under current conditions.

While a significant player in China, a lack of supply means Australian beef rarely competes directly with Uruguayan product in major markets. To put Uruguayan exports into perspective, the entire 2018 volume shipped to all markets (325,000 tonnes swt) was comparable to what Australia shipped to Japan alone (316,000 tonnes swt) and just 29% of total Australia exports.

Over time Uruguay may grow its feedlot industry to better target premium grainfed markets but will remain reliant on imported feed grain from neighbouring countries. In addition, Uruguay may need to find a new home for grainfed product currently entering the EU if the US was to dissolve the HQB global grainfed quota – a matter which remains unresolved. Moreover, Uruguay may also promote its high quality grassfed beef credentials and carve out niche markets in Japan, or target the manufacturing beef market currently dominated by Australia.