Cuts to US cattle slaughter capacity due to COVID-19 have pushed US exports lower and prices higher over the last month. While there have been some signs of a modest increase in US beef processing capacity in the last two weeks, COVID-19 will continue to slow chain speeds and cause disruptions up and down the supply chain throughout the remainder of 2020. Unfolding supply dynamics in the US will have a significant influence on Australian beef exports but the timing and magnitude of the US production recovery makes forward planning problematic.

As discussed recently, US slaughter capacity has been substantially cut over the last two months as plants have been forced to temporarily close or slow chain speeds due to COVID-19. The figure below compares pre-COVID-19 expected US weekly beef production (based off seasonality and the forecast annual total from the February USDA World Agricultural Supply and Demand Estimate report) with what has actually taken place.

As illustrated below, the impact on beef production was most acute at the beginning of May. The last two weeks have registered some production gains, however, with packers likely spurred on by President Trump’s executive order designating meat processing as ‘critical infrastructure’ and encouraged by significant profits per head for those that can keep plants operating.

US kill floors have begun to kick back to life but will struggle to return to full capacity in the short term due to slower speeds and the constant threat of re-infection. Steiner Consulting estimate cattle slaughter is currently tracking 20-25% below full capacity, albeit an improvement on the near 40% offline three weeks ago.

US a customer and competitor

While COVID-19 has triggered an unprecedented run on wholesale beef prices in the US it has also dampened foodservice demand, where the majority of Australian beef is consumed. As such, the rise in US beef prices have primary supported domestic product entering retail channels, with only limited support offered to imported manufacturing prices, as illustrated below.

US beef exports posted the strongest first quarter in two decades but have contracted in April and May amid the supply shortage and domestic customers being prioritised. The sharp rise in US retail demand for mince has made putting forequarter cuts through a grinder more attractive than exporting the primal to Asia. The US composite wholesale chuck primal value last week was 168% above where it started in March and 157% higher than year-ago levels.

In the last month, US beef shipments to Japan and Korea have declined at a time when they are usually ramping up to meet elevated demand over summer. For the week ending 7 May (the most recent data available) US exports of beef muscle cuts to all markets were 12,200 tonnes swt, well below the 17,700 tonnes swt registered five weeks earlier and 14% below the previous four-week average. Shipments to Japan were 22% below the previous four-week average, and those to Korea were 17% lower.

Even if US production were to quickly bounce back, given the road and rail freight time from the Midwest or Texas to the west coast and then a two-week shipping period, US beef supply in North Asia will remain tight for at least a month.

The current and impending shortage of US product in North Asia has pressured prices higher. Quotes on wholesale US chuck rolls in Korea have jumped almost 50% over the last two weeks, to levels not seen in the market since the US regained entry in 2007. Other primal categories in Korea have recorded more modest increases. US chuck eye roll quotes into Japan from June production have reportedly jumped 60–70% from what was offered on April production.

As well as the short-term supply crunch, COVID-19 has completely disrupted the normal flow of cattle through US feedlots. Despite the US opening 2020 with 11.96 million cattle on feed, 2% more than a year ago, numbers have dwindled since.

Spooked by collapsing fed cattle prices, as reduced slaughter capacity created an oversupply of finished cattle, US lot feeders placed substantially fewer cattle on feed in March and this likely continued into April (placement figures for April are released Friday). Unlike the pig and poultry industry, where producers have reportedly been forced to cull livestock due to plant closures, cattle that have not gone onto feed are being managed on pastures. Reasonable pasture conditions going into summer and plentiful hay stocks have allowed producers to keep growing cattle outside of feedlots. 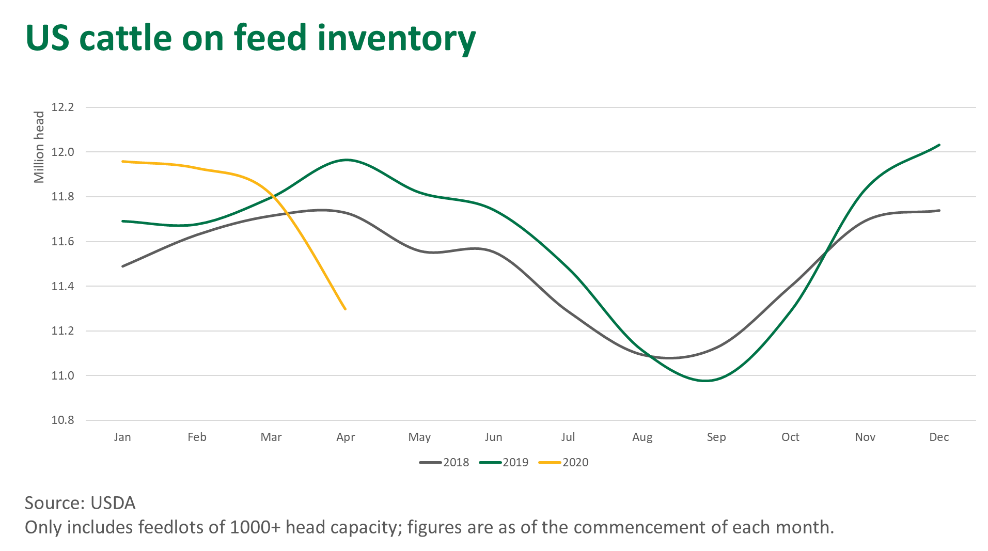 However, timing cattle placements, managing feeding regimes and hitting finished weights for when slaughter capacity recovers will be incredibly difficult for US feedlots. There’s a lot of room to misjudge when demand for cattle will return. A look at the futures market doesn’t provide much confidence for US lot feeders either: the August and October contracts on finished cattle are currently 17.9% and 16.2% below, respectively, where the spot market finished on Wednesday.

If slaughter capacity recovers quicker than feedlots are anticipating, there may be a lot of cattle placed on short-term high energy rations to meet the shortfall of slaughter ready cattle. If slaughter capacity cannot recover as quickly as feedlots expect, or further outbreaks trigger a second wave of plant closures, there could be a lot of overfed, overweight cattle backing up in the system. Either way, the room for error is large and there will be greater numbers of out-of-spec cattle coming through the US system.

Timing may be everything

Much regarding the speed and magnitude of the US supply recovery is unclear, as it largely depends on how COVID-19 can be managed. Just as it is difficult for the US industry to forward plan, it is equally challenging for Australian lot feeders and exporters to pick the timing of any shortfall in global markets. Add high Australian feeder cattle prices, elevated ration costs and an uncertain demand outlook and decisions are not made any easier.

For those wishing to monitor how US beef supply is evolving, three critical reports to keep an eye on include:

MLA will continue to monitor and report on how the US market is evolving in response to COVID-19.