Volumes of imported beef from New Zealand and Australia remain limited, due to seasonally lower supplies and sustained strong demand from Asian markets. Japan and Korea, are established recipients of Australian manufacturing product and demand remains robust. For the calendar year-to-August, exports of manufacturing beef to China have surged to 17,400 tonnes, limiting the availability of additional product that would otherwise be destined for the US market. A host of Central American suppliers have increased shipments to the US market, with lean beef offerings trading at a significant discount to Australian product.

US cattle futures lifted late last week as packers conceded to paying higher prices for cattle delivered during the next two weeks. The possibility of further volatility in the US cattle futures market looks likely in the short term. Beef demand was very strong through the summer and that supported cattle prices, despite an increase in feedlot inventories. However, the futures market continues to point towards sustained beef demand throughout the remainder of this year and into next year. Ample supplies may have negatively impacted the cutout value in the short term but prices remain well above last year. 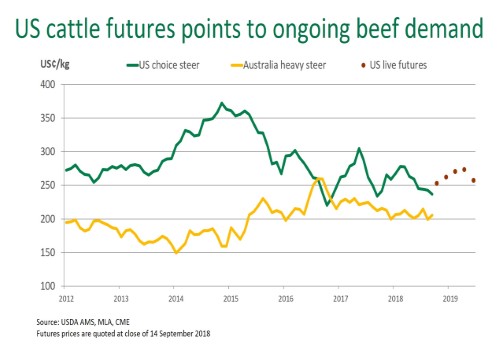