The US cattle herd typically runs through periods of expansion and contraction every ten years or so, and with the US positioned as one of Australia’s major competitors, their beef supply has a direct impact upon Australia. Additional US beef supply above domestic utilisation will be re-directed towards export markets, competing directly with Australia for market share.

The USDA recently released their January 1 cattle herd estimate, with figures indicating that the US herd expansion has come to an end.

Total inventory of US cattle and calves was estimated at 94.4 million head, down 0.4% on January 2019, while beef cattle were 1.2% lower than January 2019 - the first decline since 2014. While these figures indicate that the expansion has ended, no major liquidation is underway just yet.

US cattle on feed numbers are up 2.1% year on year, resulting in higher slaughter for the first quarter of the year before declining later in 2020. Higher carcase weights are projected to offset a decline in slaughter later in the year, with beef production forecast to lift 1%, totalling 12.5 million tonnes cwe in 2020. 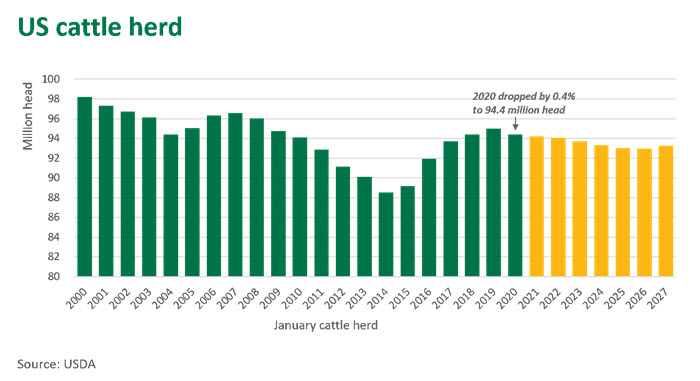 The US continues to grow and challenge Australia’s share in key export markets, particularly in North Asia. The USDA are forecasting US exports to increase by 9%, to 1.19 million tonnes swt for 2020. Japan, South Korea and Mexico are the top three destinations for US beef, followed by Hong Kong and then Canada. China will potentially become another major destination for US beef (following the new trade agreement reached in January), and although it will create competition in some channels, it is unlikely the US will be in a position to displace Australian product any time soon.

For more detail on US cattle supply, please refer to the weekly Steiner US market report.