What can be expected from Brazil’s beef access to Indonesia?

Brazil has been cleared to supply beef to Indonesia – the world’s 8th largest beef export market and Australia’s 5th largest in 2018.

Brazil has been working on access for a number of years but the pathway was cleared after buffalo meat from India, another country not free from Foot-and-Mouth Disease (FMD), was approved back in 2016.

Indonesia is free from FMD and is an important market for Australia, particularly the northern cattle industry, however strong beef demand growth in Indonesia will eventually outstrip Australia’s capability to supply all segments. The entry of Brazil will apply competitive pressure to Australia but both will continue supplying into an ever-expanding beef market.

Australia shipped a broad array of products to Indonesia in the 2018-19 financial year, including A$689.8 million of live cattle, A$274.4 million of frozen beef, A$48.4 million of chilled beef and A$105.9 million of beef offal, making it worth a record A$1.12 billion and the fifth most valuable market for the Australian cattle industry.

The growth of Australian exports to Indonesia has been underpinned by the expansion of an affluent consumer class: the number of households earning in excess of US$35,000 per annum (those that can afford imported beef in their diet) increased 83% during the last five years, to 1.15 million in 2018, and is expected to increase three-fold over the next five.

Brazil has been expanding its footprint in Asia but has been restricted from markets, notably Japan and Korea, due to its FMD status. It has expanded its presence in South East Asia, in particular the Philippines, but has mostly focused on growing a beef trade with China.

What impact did Indian buffalo meat have?

Before determining the significance of Brazilian beef’s newfound access, it’s important to assess the impact Indian buffalo meat had and the broader balance of beef supply in Indonesia.

Indian buffalo meat is one of the cheapest proteins on the global market and sets the price floor for commodity beef. Given India’s FMD status, imports into Indonesia are managed through permits and by state owned importers and distributors. Indian buffalo meat is able to provide consumers access to more affordable protein, retailing at the government reference price of IDR 80,000/kg (~A$8.30/kg) although a vendor may opt to also sell some higher priced units. In comparison, fresh beef is currently retailing in wet markets for IDR 120,000/kg (~A$12.40/kg or a 50% premium to buffalo).

Prior to the entry of Indian buffalo in late 2016, the five-year annual average beef import volume was 53,000 tonnes swt and Australian boxed beef accounted for almost three quarters of that. As highlighted below, the arrival of Indian buffalo saw the imported beef market more than double over the following two years and surge in 2019 but not at the expense of Australian shipments. While feeder cattle exports declined in 2017 and 2018, this was more a reflection of tight supply, high feeder cattle prices and tough trading conditions, rather than Indian buffalo undercutting the market (in both years export feeder cattle prices to Indonesia remained near record highs).

Over the last twelve months, a surge in Indian buffalo imports coincided with an increase in Indonesian boxed beef and offal imports from Australia, and at the same time Australian feeder cattle shipments recovered.

While an affluent consumer class is quickly emerging in Indonesia, Australian beef remains out of reach for the vast majority of consumers. Hence, instead of displacing Australian beef and cattle in Indonesia, cheap Indian buffalo provided an affordable alternative which allowed the market to expand, with consumers trialling more red meat.

According to the latest FAO data, protein consumption in Indonesia averaged 61 grams per person per day in 2011-2013, ranking it 141/175 countries and trailing the likes of Australia on 105 grams. In addition, the World Bank estimates 10% of the population remains below the poverty line and approximately 1 in 3 children are stunted. As the Indonesian population continues to swell, it will need to expand its protein supply either through domestic or imported means.

While small on a per capita basis – at an estimated 1.98kg retail weight per person in 2018 – total beef consumption in Indonesia has expanded 24% over the last four years and the OECD-FAO estimate this will expand another 10% over the next five.

For now, Brazil has been permitted 50,000 tonnes swt of frozen beef access (albeit, to date, just 25,000 tonnes swt has been released and 10 Brazilian establishments approved to supply), valid for the next twelve months and to be managed through state owned enterprises. Brazilian beef enters the market, in terms of quality and price, between Indian buffalo and Australian beef and poses a greater competitive threat.

So, what may be expected by Brazil gaining access to Indonesia?

Preliminary modelling by the Centre for International Economics (CIE) commissioned by MLA concluded that the entry of Brazilian beef would have a modest impact upon Australian cattle and beef shipments. Exports will continue to grow in the long term, as Indonesia increasingly requires imports to feed growing consumption needs.

Even with the entry of Brazil, compared to a 2018 baseline, Australian cattle and beef exports are forecast to increase 30% and 87%, respectively, over the coming decade, just 1% and 9% less than they would have been without added competition. In short, the increase in beef demand in Indonesia over the coming decade is expected to more than offset greater competitive pressure from Brazil. 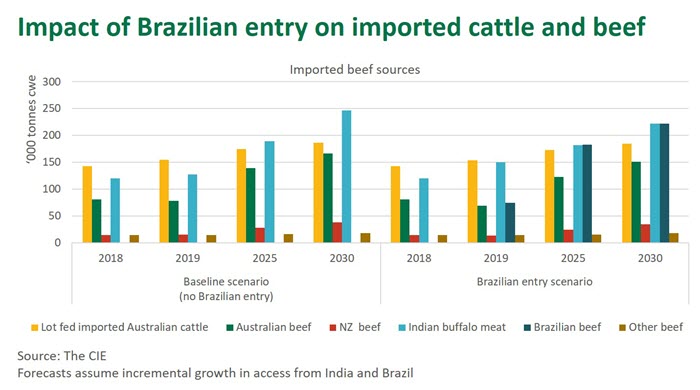 The modelled trade impact from Brazilian access is greater for Australian boxed exports, as the trade can be diverted to a broad array of alternative markets when faced with increased competition. In contrast, the northern cattle export industry heavily relies on Indonesia as a market and has fewer alternative markets to ship cattle.

As modelled by the CIE, compared to the baseline scenario, the entry of Brazilian product is expected to reduce the gross value of national product (beef produced and exported cattle) by 0.33% (or A$37 million) and diminish net income by about 1.0% (or A$25 million), than would have otherwise been the case, in 2020.

While not signalling the end of Australia’s beef and cattle trade with Indonesia, Brazil’s entry marks a dilution of Australia’s preferential access advantage and reflects the broader rise of competition from South America in Asian markets.

Australia must remain vigilant and adapt to changing consumer demands

The CIE modelling assumes the fundamental market structures remain the same, such as relative prices, distribution and retail channels, additional competitor access and government policy. However, modelling ten years out cannot capture the full complexity and dynamism of the world. For instance, what if Brazil was given unrestricted access to the market?

As such, the Australian cattle and beef industry must continue to adapt to market conditions and position itself to leverage its comparative advantages, as it cannot compete on price alone.

Australian beef and cattle have some clear advantages to Brazilian beef and Indian buffalo. According to MLA’s Global Consumer Tracker*, the three primary motivators of Indonesian shoppers when purchasing beef are halal, freshness and safety in that order – characteristics in which freshly slaughtered imported cattle and chilled imported beef from Australia can own, to varying degrees, but none of which can be truly attributed to Brazilian beef or Indian buffalo.

In addition, Australian beef and cattle will benefit from improved market access upon ratification of the Indonesia-Australia Comprehensive Economic Partnership Agreement (IA-CEPA). Moreover, the Australian cattle industry has a longstanding relationship with the Indonesian trade and MLA is investing in projects to ensure that Australia’s integrity systems and brand are recognised and resonate with the consumer.

Brazilian beef will likely make inroads in manufacturing segments, notably in popular Bakso ball street food, similar to the space it dominates in the Philippines. In actual fact, this is where the entry of Indian buffalo has had a noticeable impact, with Australian manufacturing beef declining from 39% of exports to Indonesia in 2016-17, to just 24% last financial year (2015-16 is not a fair comparison as secondary cuts trade restrictions were still in place).

Given the manufacturing market in Indonesia is driven by price, relatively expensive Australian product will be challenged to compete. In reality, there will be more significant competition between Australia and Brazil in frozen secondary cuts. In Malaysia, for instance, Brazilian secondary cuts appear in lower-end foodservice and as mince product in supermarkets and hypermarkets, while in the Philippines primal cuts have a presence in low-tier modern retail.

Many opportunities exist for Australian beef, with a burgeoning middle class of Indonesian consumers earning higher incomes and aspiring to eat better quality red meat – more than 70% affluent Indonesians say they would like to eat more beef in the future (Source: MLA Attractive Cities Study, 2018). Indonesian consumers already associate Australian beef as being superior, halal and safe, which can be leveraged in segments where Brazil presents direct competition.

Meanwhile, Australian beef must adapt to the consumers of tomorrow, who are seeking premium quality product, underpinned by systems they can trust, but also demanding to know more about the beef they consume, including information on provenance, traceability, welfare and sustainability.

*The 2018 Indonesia Global Consumer Tracker survey is skewed towards young female grocery buyers from higher income households and exclusively covers Jakarta. While not representative of the national population, it captures a more accurate picture of Australian beef’s target market.