With no reprieve from dry conditions, restocker confidence in the east remains subdued despite cattle being pulled forward in strong numbers across NSW and Queensland. A failed autumn unsurprisingly maintained elevated yardings over winter for northern centres however high throughput of young cattle has continued into spring, maintaining downwards pressure on the EYCI. Feeder buyers, and more recently processors, have provided some support for store cattle prices, with processors purchasing younger cattle due to strong export returns.

While the EYCI lifted above 500¢/kg in October, following a brief dip in September, the WYCI has been consistently strong, remaining above 500¢/kg since May. For the week ending 21 November, cattle moving through the saleyards in the west surged to near peak levels as the rise in WYCI attracted bigger yardings. While the west has also experienced below average rainfall across 2019, a slightly better autumn rainfall and some restocker activity provided support to the market.

At the finished end of the market, the largest spread has been in heavy steers, with eastern states prices outperforming the west and the benchmark indicators on either side of Australia averaging 295¢/kg and 270¢/kg live weight respectively. Medium cow prices have also favoured the east, trading 13c/kg above the west at 217c/kg for the week ending 21 November. 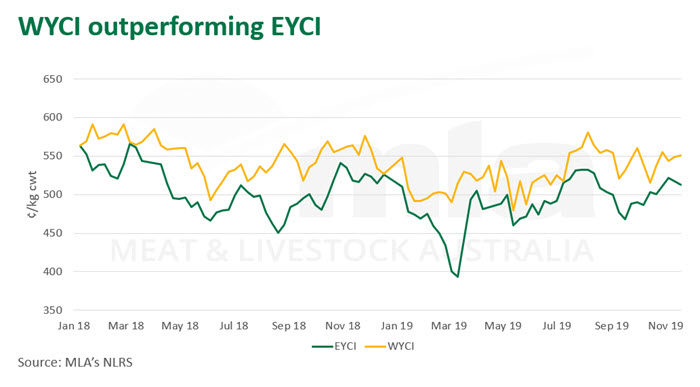