The following principles provide a basis for managing weeds.

Apply the '3Ds' of weed management to increase pasture competitiveness while reducing the proportion of weed species in the pasture.

Fire is a strategic tool to manage weeds in northern production systems.

What constitutes a weed?

Pasture weeds are not always easily determined, as most weedy species have some feed value at some point in their life cycle.

This complicates weed management, as the weedy status of a plant depends on the time of year, its location, the livestock enterprise and management objectives.

Weed impact varies according to season, climate, soil type and, most importantly, the management of the pasture. However, weeds generally have one or more of the following characteristics:

Undesirable or ’weedy’ species in pastures generally fall into one of the following four categories.

Annual grasses, such as silver grass, barley grass and brome provide quality feed from the autumn break until early spring. After that:

Annual grasses are a valuable component of pastures where soil type and climate limit the success of perennial grasses, but can dominate a pasture at the expense of more desirable species.

Shallow-rooted annual grasses usually allow more moisture and nutrients to pass through the soil profile, and this can contribute to increases in dryland salinity and soil acidity.

Broadleaf weeds such as Paterson’s curse, St John’s wort and thistles can rapidly dominate pastures, especially where bare patches are increasing and pastures are set-stocked.

Broadleaf weeds have the following characteristics:

Livestock will graze young broadleaf weeds when stock densities are high enough to overcome selectivity, and the pasture has been rested to encourage a more upright growth habit in the weeds.

Livestock avoid grazing the lower quality species when other feed sources are available, allowing the perennial grass weeds to dominate.

Other perennial grasses, such as bent grass or couch, use the space and resources that could otherwise sustain more productive species.

Prevent perennial grass weed invasion by identifying them soon as they appear as isolated plants, and applying the 3D weed management principles.

Some perennial grass weeds can be used for livestock production by keeping them leafy with targeted grazing management.

Producers need to decide whether to control or use perennial grass weeds on their particular circumstances.

ntroduced woody weeds such as blackberry, gorse, sweet briar, mesquite and parkinsonia are long-lived and can dominate pastures if left uncontrolled.

Several selective herbicides are effective on these weeds with minimal damage to pasture cover but can be expensive and time consuming to apply over large infestations.

Woody weeds have the following characteristics: 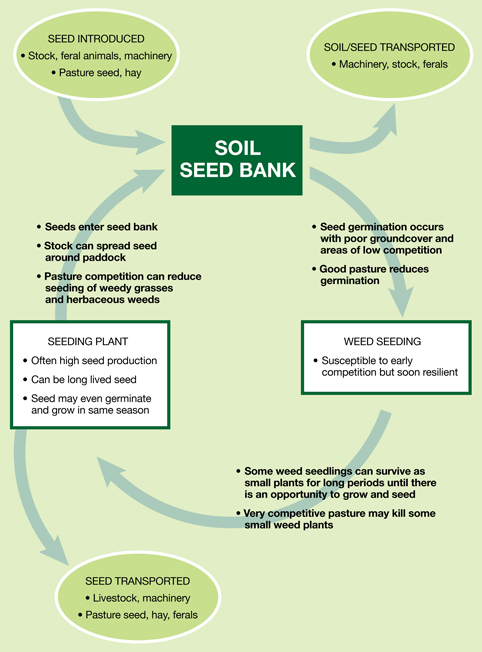 A clear understanding of a weed’s life cycle can help to identify the weed’s strengths and weaknesses, assisting the development of an appropriate management strategy.

Manage in response to season

In poor (dry) seasons, pastures may be stressed, dormant or inactive and management tactics to control weeds and encourage desirable species will therefore have limited impact.

Adjust management according to the prevailing seasonal conditions.