A prototype feed truck auto-delivery system, suitable for retrofitting on existing feed trucks in feedlots, has been developed to ensure more consistent and efficient delivery of feed into bunks.

In a joint project between MLA and Bindaree Beef Group, the technology has been developed to address productivity, staff training and safety issues in commercial feedlots.

Automation and robotics solution company Manabotix designed the technology and is now in a second phase of testing the system on a Roto-Mix feed truck at Bindaree Beef Group’s Myola Feedlot at North Star, NSW.

Watch the video below to find out more about how the system works. 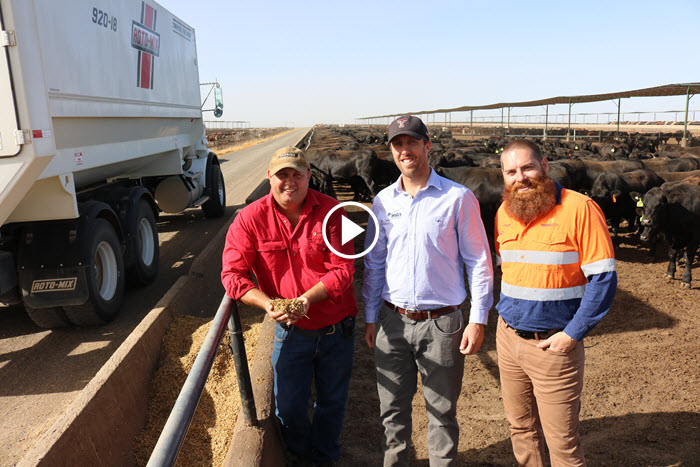 “The first benefit of the technology is to ensure even distribution of feed along the bunk so every animal can get access to feed,” Dr McMeniman said.

“The second is accurate feeding. For bunk management purposes in the feedlot, we like to have accuracy of delivery of plus or minus 0.1 of a kilogram per head, so on a 200-head pen that’s about 20kg that we’re targeting with our feed delivery accuracy. The technology to date has shown it can achieve that quite easily.

“The third key benefit is improving the overall efficiency of feeding. We want to ensure that where possible, we accomplish feed delivery in a single pass along the bunk with limited or no reversing, and in our initial pilot work, that has been shown to be a key benefit of the technology.

“And the final benefit, which is really important to the feedlot industry, is to ensure ease of staff training and retention of feed truck operators.”

Myola Feedlot Manager, Jeff Dight, said the feedlot had already seen the potential benefits of the auto-delivery system during testing.

“Feeding cattle is all about consistency – cattle are creatures of habit and they need to be fed at a consistent time, and a consistent amount down the bunk.

“The role of a feed truck operator is not easy and we found new drivers had a propensity to drop feed at the end of the bunk or end up short of feed along the bunk, so the cattle were fighting over feed.

“So we initiated discussions with MLA, and Manabotix came on board, to see if we could come up with the technology for an auto-delivery system that delivered feed evenly, avoided unnecessary reversing of trucks, which can cause damage but also make it a lot harder to feed, and make it easier to train staff,” Jeff said. 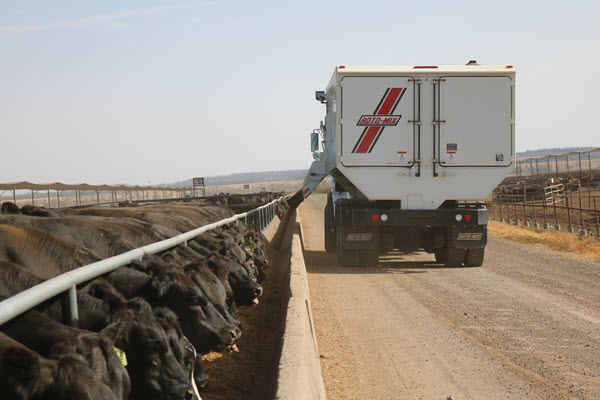 Manabotix Managing Director Dr Stuart McCarthy said the in-feedlot testing of the technology had demonstrated it can address all of the issues listed above and more.

“The technology also has an interlock on the pen, so if the feed truck arrives at the incorrect pen for a delivery, it’ll be prohibited from delivering any feed to that pen,” Dr McCarthy said.

“The technology is fundamentally a software solution which uses adaptive artificial intelligence algorithms to automatically control the flow of feed into the bunk in an accurate and even manner according to the allocated feed plan.

“As well as being a software solution, we obviously have hardware interfaces to be able to control the machine in its normal operating environment.

“Our testing has objectively demonstrated that the prototype system provided more accurate and more time-effective first pass and final deliveries than humans.”

MLA is working with Manabotix to commercialise the system so it’s available to all Australian feedlots.

MLA would like to acknowledge the funding contributions of Bindaree Beef Group, grainfed levies, the Australian Government, and the Australian Lot Feeders’ Association, for supporting the current phase of the project.