State of the Industry Report 2020 released 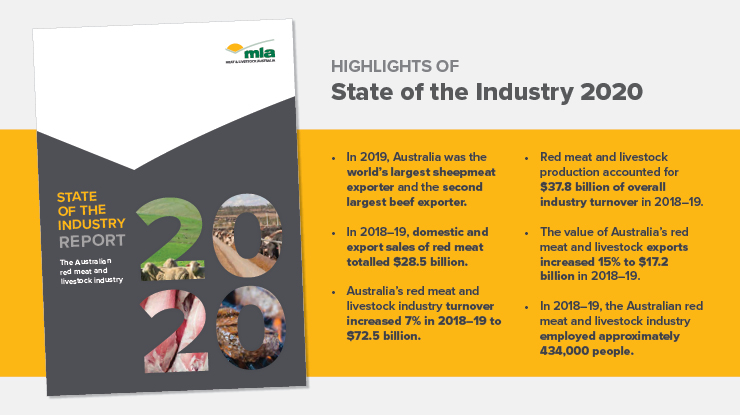 That’s according to the Australian red meat and livestock industry State of the Industry Report 2020, produced by Meat & Livestock Australia (MLA) and released today on behalf of the Red Meat Advisory Council (RMAC) and red meat industry.

The report provides an overview of Australia’s red meat and livestock industry, including figures on production, consumption, exports, the economic significance of the industry and key issue snapshots.

MLA Managing Director, Jason Strong, said the report highlights the resilience of Australian red meat producers in the face of both domestic and global challenges.

“Drought intensified across the eastern states with the Bureau of Meteorology officially declaring 2019 as the hottest and driest year on record in Australia,” Mr Strong said.

“Cattle and sheep producers were forced to de-stock, driving the national herd and flock to historical lows. The national bushfire crisis further tested the resilience of many producers.”

“We were the largest exporter of sheepmeat and the second largest beef exporter after Brazil in 2019, accounting for nearly a quarter of total red meat traded,” Mr Strong said.

“China’s position as a key market for Australian red meat continued to grow, with the outbreak of African Swine Fever driving demand for protein to the market. China’s market share of Australian beef exports in 2019 was 27%, followed by Japan with 23% and the United States with 22%.”

Mr Strong said Australia remained one of the world’s largest consumers of beef and sheepmeat, with per capita consumption sitting well above the global average, while total global consumption of meat has been steadily increasing over the past 20 years.

“In Australia, plant-based protein consumption accounts for 0.3% of fresh meat volume sales, compared to red meat which makes up over a third of total volume of sales,” Mr Strong said.

The number of red meat and livestock businesses in Australia has remained relatively stable over the past five years, experiencing a minor decline in 2018-19 of 3% to approximately 77,500 businesses.

“Despite this, industry turnover of red meat and livestock recorded a notable increase over the same period, while industry value add and employment levels in the red meat sector remained stable at a time when the industry was suffering one of the worst droughts on record,” Mr Strong said.

Mr Strong said COVID-19 had created heightened uncertainty and volatility in the global marketplace, resulting in a shift in consumer needs and purchasing behaviour throughout 2020.

“An increased number of consumers are seeking products that are deemed trustworthy, healthy and of a high quality,” Mr Strong said.

“While the long-term economic impact of COVID-19 will no doubt be severe, Australia’s standing as a provider of high quality red meat product, both domestically and globally, has somewhat sheltered the sector from the worst of the economic fallout.”