Feed that keeps on giving 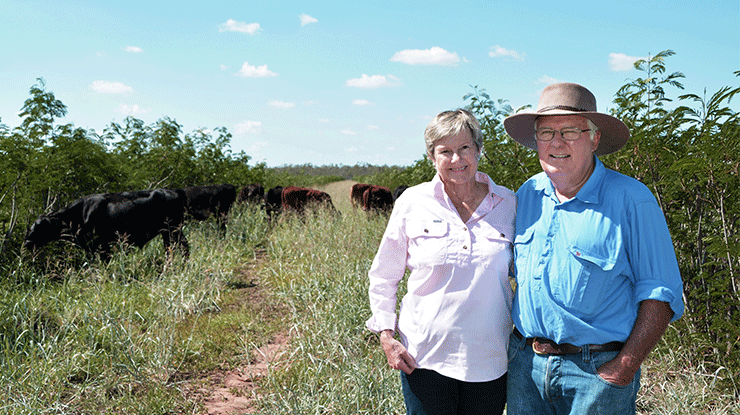 Steve Williams said there’s no such thing as a magic pudding in agriculture, but leucaena is as close to it as he’s ever seen.

The Williamses’ leucaena has been featured in MLA‑sponsored field days, but now their experience will be made available to other producers through the Elders Innovation Project, which is co‑funded by Elders and MLA Donor Company.

One focus of the project is to provide information and extension about research and development that hasn’t been widely adopted, such as leucaena, using Elders agents and MLA.

The Williamses buy in steers at 300kg and sell them to feedlots at 450kg. Steve seeks a ‘type’ of cattle, rather than a particular breed, and ends up with a lot of black cattle, although they’re invariably not pure Angus.

Using leucaena, they can fatten cattle at a rate of 1kg/day for about 35 weeks of the year.

The farm has eight 40ha leucaena paddocks, set up in ‘cells’ of two or three around a central watering point connected to the cattle yards by a laneway system.

“We don’t have any water in the leucaena paddocks,” Steve said.

“The cattle come out to water.”

Steve capitalises on this behaviour when he wants to move the cattle on to a new paddock; he simply shuts the gate in the grazed paddock and opens the gate to the new paddock.

Similarly, if he wants to bring the cattle in to the yards, he waits until they come out of the leucaena paddocks to water.

Steve ran a cow‑and‑calf pastoral enterprise in western Queensland before moving to the Darling Downs 15 years ago.

“By the time they’re through the third one, they can go back into the first paddock, which has had about two months’ rest.

“It helps that we have no debt.”

Doing it right the first time

It cost the Williamses about $500/ha to establish leucaena. Steve recommended planting at 40 seeds/m with a double disc plough.

The leucaena is planted in double rows at 1m spacings and a 6m wide inter‑row. The inter‑row pasture of bambatsi panic, Rhodes grass and the native creeping bluegrass is an important component of the feedbase.

“If I was starting from scratch now, I’d put 10m between the rows to give more inter‑row pasture,” Steve said.

“With the 6m inter‑row, I run out of grass but I don’t ever run out of leucaena.

“Leucaena will get frosted, so you need a winter forage crop of some kind to maintain this weight gain.

“In a dry time leucaena comes into its own. In a good season you can fatten cattle on any pasture. By lowering your stocking rate you will still have weight gains of 1kg/day. You therefore have more control when it’s dry and the pressure’s on.”