No substitute for best practice 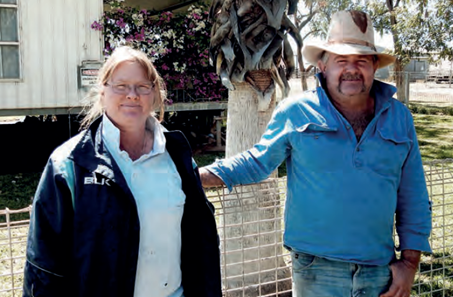 The couple, who manage ‘Ruby Plains’ and its outstation ‘Sturt Creek’ in the Kimberley, combine best practice management with extensive experience to achieve an enviable breeder cow mortality rate of just 1.32%.

MLA Research Coordinator Geoff Niethe, who toured the Kimberley recently as part of a Northern Beef Extension Officer Mentoring Program, was impressed when he crunched the enterprise’s numbers through the MLA breeder mortality calculator.

“In all my years of analysing herd data and scrutinising breeder productivity in northern beef pastoral operations, I’ve never seen a mortality rate this low,” he said.

“Turn-off numbers, such as the number of stock that are actually counted on to a truck, are usually the most accurate data reported for any breeding enterprise,” he said.

“These figures should be closely aligned with the number of animals branded and, in the cases of Ruby Plains and Sturt Creek, after taking into account final closing numbers, around 95% of the stock branded were trucked off the property in the past five years.”

Geoff said another quick guide to breeder mortality rates is the percentage of females sold as a proportion of the total turn-off if the size of the herd is stable. At Ruby Plains, it was 50%.

According to Merv, the primary cause of cow mortality on the property is nutritional stress and, to manage this, a combination of strategies to preserve and manage cow body condition are employed.

“We have a controlled breeding program so calves are born approaching the wet season and lactation is matched with peak pasture growth periods,” he said.

“We segregate first-calf heifers and pregnancy test them into calving groups, so we can target cows that are out of season with lick and put them in better paddocks for the hardest parts of the year.”

Merv and Jenny also wet-season spell paddocks to build up their fodder reserves.

The secret to great bookkeeping

According to Jenny, it’s not rocket science: “Just do it.”

“We use a computer program that head office set up for us and we make sure we record numbers and enter them into the system,” she said.

“Every movement is recorded in and out of paddocks. We record weanings, brandings, deaths, pregnancy test results and vaccinations.”

To reduce the workload associated with data input, every animal has a management tag and corresponding National Livestock Identification System button which is scanned into a Gallagher TSi system. However, if this system isn’t available, cattle are still manually counted.

According to Jenny, the main challenge to robust record keeping is technology failure.

“Our largest time loss is when the TSi freezes, so we always keep a spare,” she said. “And we use a lot of manual back-up. The company has specially-made books for keeping the paddock records and they’re returned to the office where the information gets entered into the system.

“My advice is the more details you write for a paddock, the better.”

Want to learn more about the fundamentals behind successful northern cattle breeding?

Get along to an MLA Breeding EDGE workshop.

Upcoming events will be held at: Katherine, NT, and Cloncurry, Queensland.