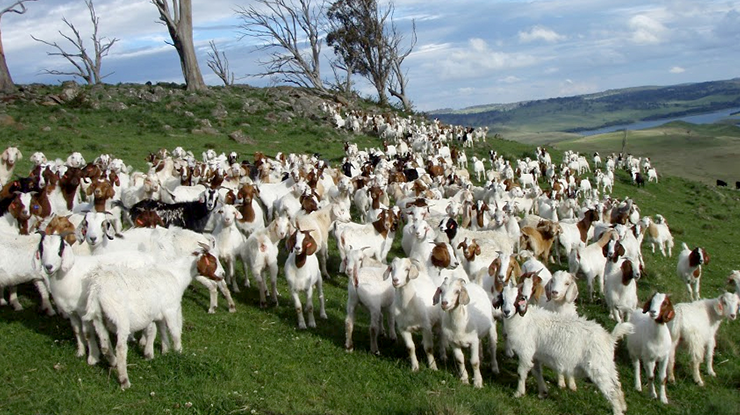 Bill and Jacqui manage a 1,760ha mixed grazing business near Guyra in the New England region.

While goats are far from the primary income generator in the Perrottets’ business, they have provided a useful supplement to the income of the other livestock enterprises without significantly increasing the demands on feed.

The Perrottets diversified into goats in 2001 to manage woody weeds and thistles including blackberries, Nodding thistle and Scotch thistle, which thrive in their high-rainfall zone and can increase at a rapid rate without suitable control.

Bill said the goats didn’t compete excessively for the conventional pasture base with other livestock, but they increased the total business return in the process.

“The pasture is consumed by the goats but the proportion of total intake appears to be minimal. This means the goats are rarely competing with other livestock for feed resources,” he said.

In fact, the weeds appear to be preferentially grazed by the goats over the pasture due to their grazing habits.

“Woody weed infestations accounted for up to 50% of total ground cover on some areas of the farm 20 years ago. Today, that’s down to 2% in the same areas,” Bill said.

One of the biggest challenges faced by the Perrottets by introducing goats to their business was managing the impact of altitude and the high-rainfall climate.

To combat this, the couple developed their own rainfall-tolerant breed of goat called Urandangie Brown, a mix of Australian rangeland goats and the Boer breed.

“We select bucks from our own breeding herd based on yearling live weight, foot structure and resilience to internal parasites.

“Our aim is to have a very low maintenance herd that can manage the conditions and right now, they’re looking magnificent with 430mm of rain recorded to date for 2020.”

Was it worth going into goats?

When assessed at the whole-business level, Bill said there was no marginal overhead cost in managing goats as the additional operational time is conducted with existing labour.

“In fact, since introducing goats, our herbicide costs have decreased significantly and they now represent less than 1% of the total overhead cost base of the business,” Bill said.

The total marginal benefit of the goat enterprise to Bill and Jacqui equates to $29,800/year, demonstrating that goats can generate reasonable marginal returns for businesses even though their margins may be lower than alternative enterprises.