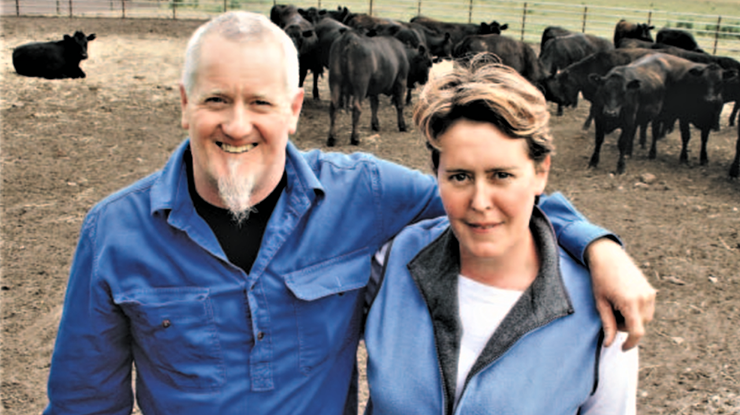 Eighty hectares of tall fescue irrigated by a centre pivot has become a crucial part of Steve and Sue Brain’s beef production business.

The Brains run up to 1,100 late winter calving cows, turning off 500kg steers at 14 to 16 months of age from their 950ha property ‘Boona’, at Mumbannar in Victoria. Average annual rainfall is 700mm.

Despite the tall fescue being a decade old, the mix of resolute and vulcan II along with white clover has remained highly productive and persistent.

This allows a good comparison between the species.

“We have been really pleased with the tall fescue, it just seems to be getting better whereas the bealey ryegrass in particular has started to thin out and more broadleaf weeds like dandelion and plantain are appearing,” Steve said.

“Ryegrass is really high maintenance and you need to be right on top of it, but the tall fescue is more robust.”

Steve puts the productivity and persistence of the tall fescue down to three major factors: water, grazing management and plant nutrition.

Irrigation starts in November, depending on the season, and commonly six ML/ha of water is used over summer, drawing on groundwater from a depth of about 20 metres.

“The centre pivots run intermittently until autumn, unless we get significant summer rain,” Steve said.

“It takes about two days to do a full circle, which applies about 12mm of water per irrigation. Any more than this and it tends to run off.

“We are trying to water to field capacity and we find the greater root system of the fescue leads to less ponding of water and better infiltration than the perennial ryegrass.”

Caption: The tall fescue when it was sown around 2013.

Steve uses a simple moisture push probe to help with the irrigation scheduling.

“We did have more sophisticated soil moisture monitoring but the paddock can vary a bit, so the probe gives me a better feel for what water to apply,” he said.

While there is a cost with fuel, machinery maintenance, and water licencing and metering fees, the Brains consistently show the investment is worth it.

“To keep our young cattle growing over summer would require feeding, probably with silage, but the pivot system is essentially a self-feeder.”

“When you work out the amount of beef we produce it makes sense, not as a separate business but as an adjunct to what we do with the rest of the farm system.”

Tall fescue commonly has a reputation for getting over-grown and hard to manage, but the grazing system developed by the Brains works well.

There are eight 10ha cells under each pivot divided by a single electric wire.

After weaning in late January, all 500 steers are grazed as one mob (45 DSE/ha), staying in each cell for two to three days.

“They enter a cell with about 3,000kg/ha of feed in front of them and leave it having grazed to down to about 1,500kg/ha so there is some leaf area left,” Steve said.

The tall fescue is at the four to five leaf stage, which Steve doesn’t mind because he wants the young stock to have some roughage in the diet, and this is supplemented by having big square bales of pasture hay in the corner of the pivots.

“By the time they have rotated around the cell and then the other pivot, we are back to about 3,000 kg/ha.”

If there is too much residual grass left after the steers have grazed, Steve will introduce a second large mob of young cows or heifers to clean up the paddock so regrowth is even.

Caption: Steve moving 500 steers to the next paddock of tall fescue.

“We want to fully feed the steers, so if there is too much residual left when they are moved we will pull this down with cows, especially late in the season because the tall fescue can get really thick.

Steve recognises grazing with a second mob is a bit of a compromise because one empty cell is needed between the mobs meaning the follow-up grazing commences after a three-day spell.

“If we don’t graze the tall fescue it will become uneven, run to head and feed quality will decline.”

The tall fescue is then rested in autumn as all the cattle go onto mixed dryland pasture.

Around 200 late pregnant cows are introduced to each centre pivot around June and set stocked for calving, with all internal fences dropped on the ground.

The tall fescue is a combination of winter active and more summer active types, meaning winter growth is equally impressive.

“The tall fescue continues to grow well in winter and therefore is less prone to pugging, especially with its dense root mat.

“It doesn’t slow down as much as the perennial ryegrass,” Steve said.

Once calving has finished in September, the cows are mobbed up and shifted to commence rotational grazing on the dryland pastures.

Internal electric fences dropped during calving and then put back and yearling steers are introduced to finish them to feedlot entry weight.

Steers are progressively sold from October through to December when they reach around 500kg liveweight.

The weaned calves are introduced in January and the cycle starts again.

The tall fescue is grown on a sandy loam soil, which had previously been used to grow irrigated potatoes before the Brains purchased the land.

The most recent soil test indicated the soil organic matter is around 3.3%, despite the light soil texture, with a pH (CaCl2) of 6.7.

While the phosphorus levels are high (Olsen P ~ 45mg/kg), the soil was deficient in potassium (Colwell K of 61) and being a free draining soil, created difficulties in maintaining adequate nutrient levels under the irrigation.

Three split applications of 50kg/ha of muriate of potash are applied in late spring, January and again in late February/early March.

“Potassium is essential and we would see a dramatic difference when we applied K,” Steve said.

“It might not sound like a biologically friendly system, but we have a lot of earthworms under the pivots and the dung beetles are very active.”

There also doesn’t appear to be any nitrogen deficiencies, with the white clover persisting with the tall fescue, despite using rotational grazing.

Clearly the Brains have mastered the management of their tall fescue to make it productive and persistent, but it is only achieved by getting parts of the system working together.

“If the watering, soil fertility and grazing isn’t right to keep growing feed, you end up chasing your tail and it all starts to go backwards.

“Personally, I’d be happier if I had two pivots under tall fescue than perennial ryegrass.”