MSA smooths the transition from dairy to beef for WA producers 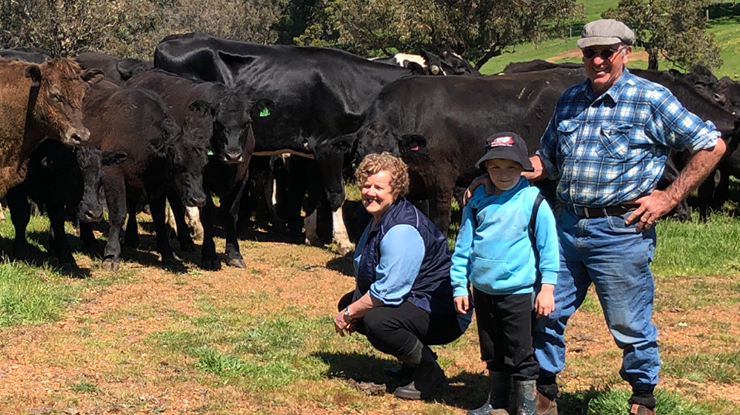 For relatively new beef producers, Annette and Bruno Italiano, the Meat Standards Australia (MSA) program has made the transition from the dairy industry to the beef industry smooth and simple.

The second-generation cattle producers from Sandlewood Farms at Harvey, Western Australia, have won the 2019 MSA Excellence in Eating Quality Progress Award for WA.

The changeover from dairy to beef was on the cards for some time but when Annette and Bruno finally made the switch, the MSA program became an invaluable source of feedback as they sought the best ways of working with beef cattle.

Through MSA compliance, they will see a greater return and a premium price for their product.

The Italianos run 570-head of mixed age Friesian-Angus cross as well as purebred Angus over 520 hectares.

The herd comprises 150 breeders and 80 heifers, and the Italianos will explore selling joined heifers if market indicators are positive. The Italianos see the MSA program as a critical tool as decisions are made on the future of the herd.

Around 130 cattle are turned off for processing at Harvey Beef and Western Meat Packers, with an approximate average liveweight of 380-400kg.
The Italianos are seeing success with their carcase feedback and according to Annette, this can be largely attributed to the way they treat their animals.

“We wean our calves at around nine months, where they are put in a yard and fed hay, water and grain. Bruno takes this opportunity to walk amongst them, settle them down and get the calves used to human interaction,” Annette said.

Beyond their weaning techniques, Annette said their grazing and pasture management practices were key to producing quality beef.

“Paddocks on our farm are rotated at short intervals in order to ensure the quality of feed is high. We grow our own hay and the cattle are finished on irrigated pasture and hay,” Annette said.

“Our pastures include mixed ryegrass, clovers and Kikuyu.”

For Annette, being an MSA registered producer has been the perfect complement to the lessons that the family learnt as dairy farmers.
For two generations, the family have understood that stressed cows don’t produce milk, but now the MSA program is providing the Italianos with proof that a calm and content cow also produces higher quality beef.

“Anything that produces better meat for the table, all the while ensuring animals are better looked after can only be a positive thing,” Annette said.