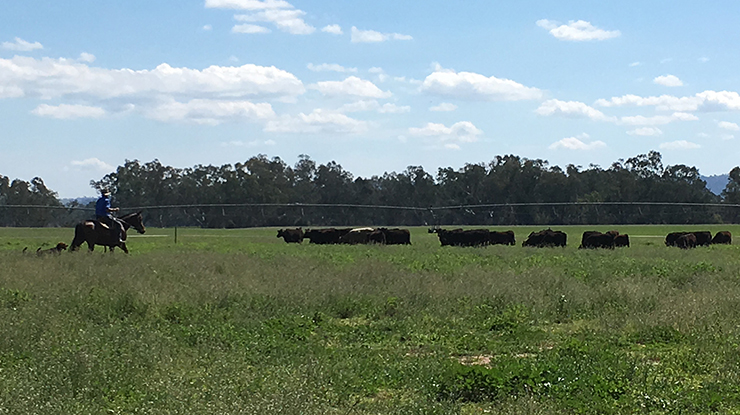 For North West Slopes beef producers, John and Rae Boland, keeping their Angus herd on a rising plane of nutrition including pastures and their own fodder crops and hay, is central to turning off cattle to suit a number of markets including Meat Standards Australia (MSA).

Their continuous improvement in compliance to MSA specifications, as well as improving their average MSA Index has seen the Bolands named as winners of the 2019 MSA Excellence in Eating Quality Progress Award for NSW.

With access to some irrigation from the Gwydir River, the Bolands grow their own oats and sorghum crops for cattle fodder and hay production at ‘Belgrove’ under a 20ha pivot on sandy loam country.

“We normally run between 1100 to 1200 Angus breeders on ‘Noonameena’, where the pastures are mainly native grasses,” John said.

“We’ve also planted some tropical pastures, including Rhodes and Bambatsi, which we’ve had success with, along with some legumes.

“We wean the calves on our own hay, and then run the steers on the oats to get them to a weight of about 350kg to 500kg for the feedlot market.

“We grow some out if the season allows and they’re usually processed at Bindaree Beef at nearby Inverell.

“Before the current drought hit, we would put the heifers on the crop as well and join them as 12 to 14-month-old heifers, which worked well.

“We usually have a 700mm annual rainfall, however, we’re right in the grip of drought now so we’ve halved our breeder numbers.”

The Bolands have been registered MSA producers since 2008 and enjoy price premiums of up to 10c/kg that MSA compliance attracts.

Rae said keeping a close eye on the temperament and genetics of their cattle are also important factors in their production system.

“We buy in bulls from local breeders including Booroomooka Angus, Matoni Angus and Leeton Grazing.

“It’s just John and I working the cattle, so we are very strict on culling for temperament and for any visible physical issues.