Livestock exports: a year in review

Following back-to-back records in the live cattle export market in 2014 and 2015, exports are set to decline for the second consecutive year due to ongoing tight supplies, high prices and a variety of in-market challenges.

Sheep exports for the calendar year-to-date declined 5% year-on-year, to 1,651,314 head. This was driven by a decline in exports to Jordan and Israel, as European suppliers have been preferred. In addition, Malaysian importers have increasingly looked to sheep and goat suppliers in Thailand and Myanmar due to high Australian prices.

Despite this, November live sheep exports totalled 231,652 head - the largest monthly shipment since August 2016. This is largely due to the recommencement of shipments to Turkey in August 2017. The government in Turkey is importing sheep from Romania and Australia, with a preference for the quality of Australian sheep. For the calendar year-to-November, exports to Turkey are just above 198,000 head, meaning it is the third largest recipient of Australian sheep.

Exports to Kuwait and Qatar have performed consistently all year round, totalling 535,479 and 560,000 head respectively for the calendar year-to-November. The underlying drivers of demand for sheepmeat in the Middle East include increasing disposable incomes, urbanisation, a growing expat population and a developing tourism industry. Sheepmeat consumption is forecast to continue to increase across a number of Gulf Cooperation Council countries.

Demand in Qatar is being driven by preparations for the 2022 Soccer World Cup; significant numbers of expatriate workers from the sub-continent are working on large construction projects across the country which has seen growing demand for imported product.

During 2017, Australian cattle exports have been restricted by tight domestic supply, as the northern Australian cattle herd continues to rebuild. Furthermore, high cattle prices, increased global competition and political challenges have also had an impact on overall exports.

Feeder and slaughter cattle exports for the calendar year-to-November are back 23% compared with the same period last year, to 694,976 head.

Shipments of feeder and slaughter cattle to Indonesia for the calendar year-to-date totalled 469,153 head, back 14% year-on-year. High Australian cattle prices, the Indonesian government’s agricultural policy goal to achieve self-sufficiency for major commodities including beef, along with price stabilisation methods that has enabled the import of Indian Buffalo Meat (IBM) are the prominent factors in reduced cattle exports to the country.

Shipments in December are expected to remain low, with the prospects of an increase in breeder exports occurring next year, as per the 5:1 (five feeder cattle imports to one breeder) policy requirements. The Indonesian government’s 5:1 policy is scheduled for the first audit in December 2018.

The availability of local (regional) cattle at the moment in Vietnam remains strong, Australian cattle sales are therefore still relatively subdued due to higher prices or lower profitability in abattoirs. However, demand for Australian cattle will be supported in the lead up to Vietnamese New Year festival (TET) in February, highlighted by delivery of 2,248 feeder cattle in November shipments. 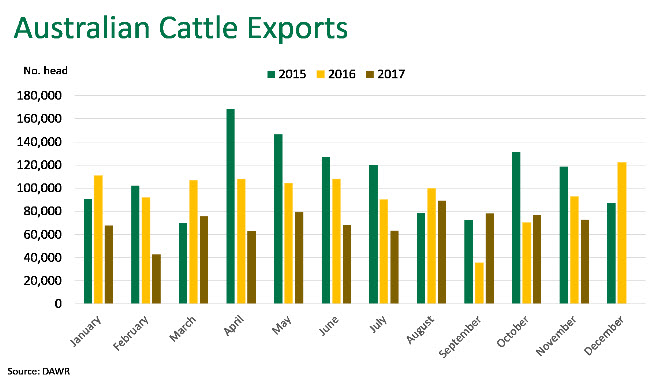