After 15 years as an economist and professional investor Piers Dumaresq returned to the family farming business in 2013 thinking he'd easily identify key profit drivers and opportunities for growth. 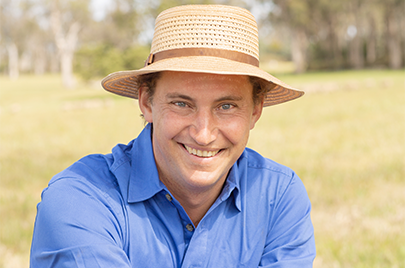 ound was a need to learn a lot more about grass and grazing systems. Building that knowledge has driven a dramatic increase in production and turnover.

It has led to lifting the ewe flock from 2,000 to 4,500 head without reducing other enterprises, which includes poppy production, 120 head of cattle, opportunity potato and onion crops and irrigated production of pasture and vegetable seeds and peas for human consumption.

“Our sheep business was clearly an area we needed to grow. At the time there were plenty of market signals telling us to produce more lambs," Pier said. In contrast his  cropping systems were profitable but stable, limited by rotation and irrigation capacity.

"I believed growing our sheep enterprise would be easy. In reality I knew nothing about grazing systems or managing pastures. It was pretty overwhelming. I quickly realised we had to go back to basics," Piers said, which in his case was starting with a Lifetime Ewe course and then moving into an MLA Profitable Grazing Systems Pasture Principles program with Macquarie Franklin's Jason Lynch.

"I really didn't know how to grow grass but I realised knowing that would be the pathway to business growth. Pasture measurement and feed budgeting are now the two most crucial tools in our business and they drive everything.

"Knowing how to grow and use grass allowed us to grow our business."

As his knowledge of animal feed requirements and plant morphology grew from the program, which is a mix of group and one-on-one learning situations, Piers identified his first stumbling block - infrastructure.

"One of the great mental blocks to overcome is the thought you need small paddocks to successfully graze your pastures. What you need is consistently sized paddocks. We had everything from 100ha to five ha," he said.

"Our first task was really very basic -  install more stock water infrastructure and fence larger paddocks into smaller ones, with the aim of making each paddock roughly 20ha. Doing this increased feed utilisation and simplified our grazing system. Investing the capital was easily justified with the return on investment  exceeding 30% per year.”

"Having accurate feed budgets is a powerful tool. You know where your sheep production is tracking and it sets guidelines for the season so when pastures are not going to meet your budget you have an early trigger to buy in more feed or reduce numbers," he said.
“This often means we have planned well in advance of requirements, securing additional feed or space at the abattoir.”

As a new entry to farming, Piers found Pasture Principles helped him form networks, learn from other producers and develop a relationship with his coach, Jason Lynch, which has proved invaluable.

"I can go and sit with him now and he knows our business and what we are about. We can crunch the numbers and model all likely scenarios as the season shapes up. Having someone like Jason aligned with our business is immensely powerful," he said.

The economist hat is being put back on for the next stage of business growth. While turnover and profitability have increased with growth, the cost of production has risen – squeezing margins. Piers is now analysing areas for efficiency gains to return greater profit to the bottom line.

"From there I will have identified a model which performs well, is efficient and is highly repeatable. This would then support us operating on a larger land base," he said

PULL OUT QUOTE: "Pasture Principles, through PGS, gave me the tools to drive growth in our business through better management of grass. Business growth would have taken much longer if we hadn't learnt how to feed budget and manage grazing for full pasture utilisation."

PROGRAM: Getting the Pasture Principles

What: The aim of the Pasture Principles program is to provide producers with a set of guiding principles that will allow them to manage their pastures confidently regardless of the season, situation or system. The program is designed to be delivered as a two-day theory workshop followed by six on-farm practical coaching sessions over a 12-month period.

and the skills to: