A quick flush pays off 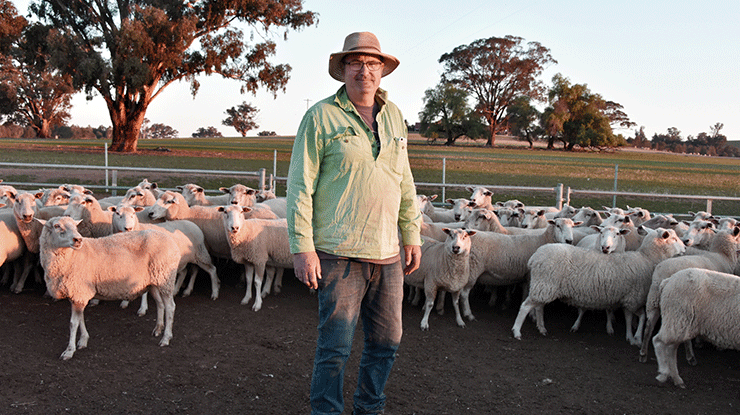 To his surprise, lamb producer Andrew Hunter found that a short flush on green feed was enough to increase reproductive rates in his maternal composite ewes.

“The two‑week flush was just as effective as the six‑week flush,” Andrew said.

“That’s a good way of conserving the lucerne for other stock.

“Using these principles, we’re gradually picking up our fertility through tighter management. It means we don’t throw money around willy‑nilly. We know the things that are going to deliver benefits to us. If we can drive fertility by management, that’s a good thing.”

Andrew’s property in the south‑east Riverina was one of 32 Producer Demonstration Sites in a project run by MLA and Agriculture Victoria that investigated the practicalities of short and long‑term flushing. He said he definitely learnt some useful lessons during the project.

“It was surprising how little green feed needed to be in the paddock to make a difference to the ewes,” Andrew said.

“We ran the ewes through a lucerne paddock that had already been eaten over by the lambs. A bit of leaf and stalk was all that was left but the flushing effect seemed to work even on that.”

The broad results from the project showed that available feed of 350kg/DM/ha minimum for seven days before joining and seven days into joining was enough to provide a reproductive benefit.

Andrew said knowing the benefits of a short‑term flush provides him with greater options in his enterprise, given that he generally runs a fairly high stocking rate. Short‑term flushing will be a useful strategic tool, especially in years when green feed is in short supply. Due to the drought, he’s sent ewes off on agistment, which will restrict his ability to flush them this year.

“We manage the ewes as individuals rather than on mob averages,” he said.

“We simply split off lighter animals after condition scoring.”

The heavier ewes (condition score 3.2 and above) will not be flushed at all, because they’ll perform well regardless of flushing.

“Then I’ll use a short flush to increase performance of the tail end of the ewes,” Andrew said.

“That’ll enable me to prioritise the good green feed for finishing lambs, giving better overall returns across the farm. If green feed was really scarce, I’d use lupins to flush the lighter ewes.

“During the trials, we set ourselves up so the paddocks with the green feed were available. It takes a bit of organising, but it’s worth it. The fact that two weeks’ flushing is as effective as six weeks makes it easier to manage.

“The real profit driver in our enterprise is fertility.”