Evolving demand, shifting flight paths and changing production systems have underpinned an air-freight sheepmeat boom to the Middle East over the last decade. We analyse the drivers behind the expanding trade and assess the risks and limitations to future growth.

As a region, the Middle East and North Africa (MENA*) was Australia’s highest value sheepmeat export market in 2018, injecting more money (A$859 million) into the Australian sheepmeat industry than the US (A$823 million) or China (A$678 million).

A market where fresh is king

Traditionally Australia’s principal live sheep export market, consumers and regulators across MENA have a strict preference for freshly slaughtered product, stemming from the short shelf life of locally processed meat in high temperature climates. However, amid growing demand for meat protein and natural resource constraints across the region, MENA increasingly relies on imported sheep and sheepmeat.

Australian live sheep exports shrunk from 4.21 million head in 2008 to 1.89 million head in 2017 (2018 contracted even further due to the temporary cessation) and have become increasingly WA-centric, as the prevalence of the once-dominant Merino wether has receded. That shift has created significant challenges in meeting demand in a market where fresh is king.

While some demand can be met by frozen product, MENA represents Australia’s largest chilled sheepmeat export market (62% of exports to MENA were chilled in 2018, compared to 15% across all other markets). However, supplying large volumes of chilled sheepmeat within strict shelf life thresholds becomes a logistical challenge through slower sea-freight channels. Hence, the rise of the MENA in air-freight trade.

Dubai, Abu Dhabi and Doha are the focal points of air traffic across the region and all have been host to significant airport expansion over the last decade, luring increasing numbers of Australian-origin flights. As highlighted below, the number of direct flights from Australia through the three hubs increased four-fold between 2008 and 2018. 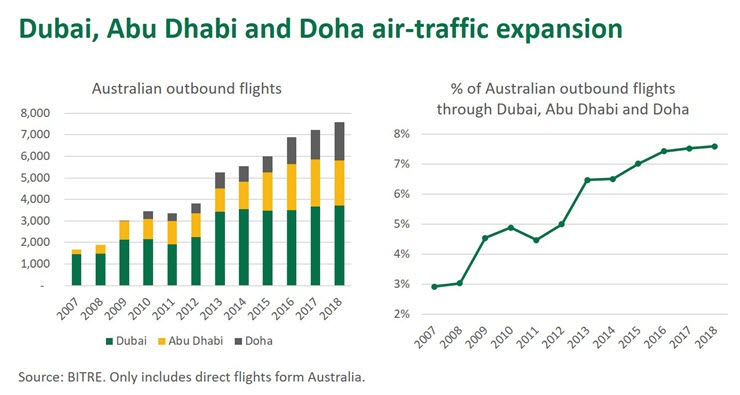 Chilled sheepmeat has been the single greatest export beneficiary of this air-traffic expansion. In fact, sheepmeat, mostly in carcase form, accounted for an estimated 68% of all outbound Australian air-freight volume to MENA in 2018. Sheepmeat racked up so many frequent flyers last year that the air-freight trade to MENA, for the first time, surpassed sea-freight on a volume and value basis. 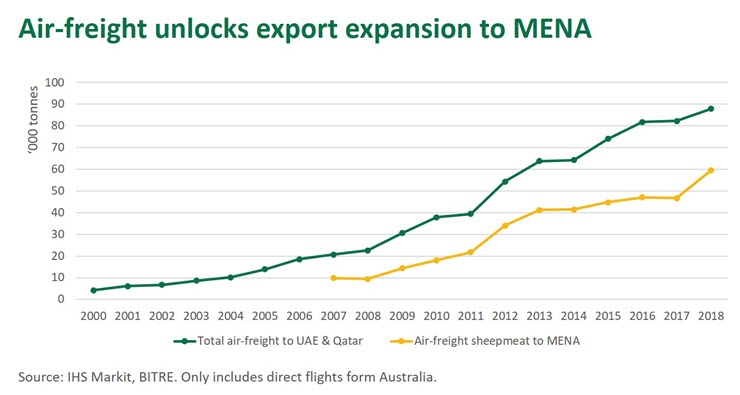 Air-freight has also unlocked new sheepmeat opportunities in the region. While the UAE and Qatar – host of the three main airports – are the primary markets, Kuwait, Jordan and Iran have also opened up as air-freight can stopover in one of the main centres and be freighted back out to other regional airports. 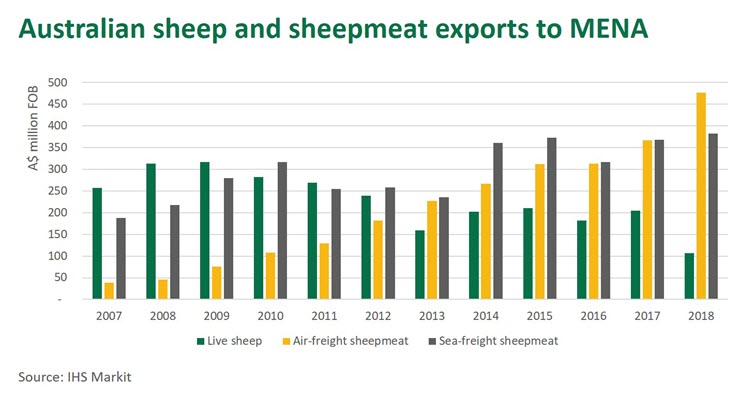 In 2018, air-freight sheepmeat exports to MENA were worth A$476 million, almost more than sea-freight (A$382 million) and live (A$107 million) combined. The temporary sheep export trade cessation in 2018 saw an almost one-for-one increase in air-freight carcase exports to Qatar, Australia’s largest live export market. However, other live export destinations were less willing or able to switch across, notably Kuwait and Oman. Iran, which opened up in 2017, accounted for the bulk of remaining air-freight trade growth to the region.

Trade sensitive to flight diversion and capped by capacity

However, past trends in trade dynamics to MENA are not a guarantor of future ones.

Firstly, the sheep export cessation in 2018 did not lead to a pathway switch for those same, predominantly WA, animals. The bulk of air-freight carcase exports are light lambs, whereas live exports are predominantly mature-weight Merino wethers. Perth did record increased air-freight carcase exports (up 19% or 2,400 tonnes year-on-year) in 2018 but the bulk of growth was driven by east coast airports (up 30% or 10,200 tonnes). The eastern states drought-induced flock reduction will hinder supply growth in coming years and light lambs may become particularly sought after if producers look to rebuild depleted numbers.

Secondly, spare airline capacity remains a significant issue for expansion. As highlighted below, Melbourne is the primary source of most air-freight but is hamstring by available capacity. Other centres have some capacity but sheepmeat must still compete with other products for space. While Perth has room to increase air-freight carcase exports, it would need to increase total air-freight three-fold to accommodate the entire turnoff currently channelled through the live trade. 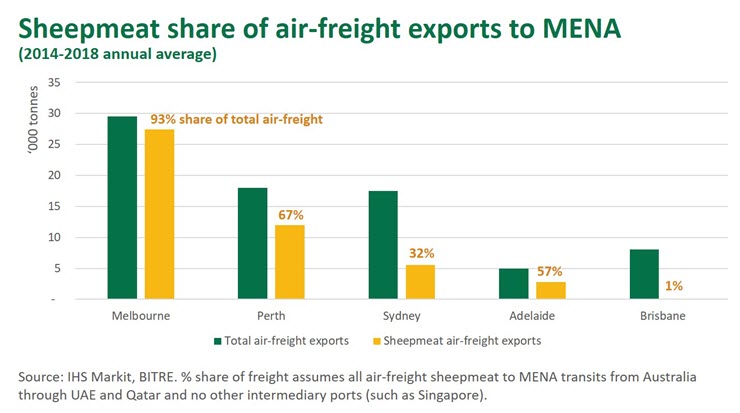 Lastly, the existing trade remains vulnerable to changing flight paths. For instance, Qantas switching the Europe-bound stopover back to Singapore last year offset the growth in other carriers flying through Dubai – meanwhile, air-freight exports to the UAE have effectively flat lined over the last three years. Other potential disruptions could stem from Istanbul’s ambitious new mega airport diverting traffic away from the Arabian Gulf (however, Dubai, Abu Dhabi and Doha all have expansion plans of their own) or if the rise of the long haul flights continues.

Moreover, a slump in the oil price could hurt the air-freight sheepmeat trade two-fold: it would hit demand in the oil-producing Arabian Gulf, and make jet fuel cheaper and long-haul flights, bypassing Dubai, Abu Dhabi and Doha, more profitable.